Joplin, Missouri, a city of 50,000, is located on Route 66, the highway that runs from Chicago to Los Angeles.  Nat King Cole performed a song written by Bobby Troup called "Get Your Kicks on Route 66" in which he mentions Joplin.

"...It winds from Chicago to L.A.
More than two thousand miles all the way
Get your kicks on Route 66.

Route 66 is the highway that my parents took to get to California on their honeymoon.  However, I'm sure they would not recognize in 2011 the Missouri community they drove through back in 1960.  I was shocked to see the images that CNN broadcast of the city yesterday that was devastated by a tornado.  The community looks like a war zone.  They say that one-tenth to one-fifth of the city has been destroyed by the twister and that up to 123 people died.

I pray for the victims of the Joplin tornado along with the other tornadoes that have hit the Mid-Western and Southern states this Spring.  I pray that the survivors will be able to rebuild their communities.  I pray that this disaster will bring out the best in the citizens of Joplin and that something good will come out of it.

When I was growing up, I remember two tornadoes hitting Ontario.  I remember collecting money at our summer church for the victims of the Woodstock tornado in 1979.  I also remember reading about the Barrie tornado of 1985.  Here is an inspiring story about the latter.

Bob Proctor tells about a vice-president of Telemedia Communications, Bob Templeton, who was driving down Highway 400 shortly after the Barrie tornado in 1985 and surveyed the damage.  He got an idea to raise 3 million dollars in 3 hours over 3 business days to help the citizens of Barrie.  He met with the Telemedia executives and one of them mentioned that his idea was crazy.  However, Bob refused to think of all the reasons he should not execute his plan and instead focussed on the reasons he should.  In the end, Bob and his executives held a radiothon anchored by Harvey Kirk and Lloyd Robertson which was broadcast in 3 hours over 3 business days and raised 3 million dollars!  All because Bob never thought of the phrase "I can't". (Chicken Soup for the Soul, "The 333 Story", Jack Canfield & Mark Victor Hansen)

"And we know that in all things God works for the good of those who love Him, who have been called according to His purpose." (Romans 8:28, New International Version Bible) 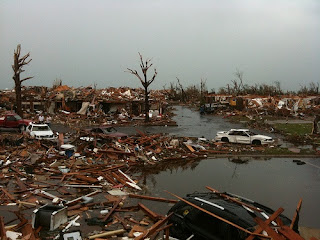