The Power of the Pen

Don’t let anyone ever tell you that one voice can’t make a difference.  Here’s a story of how powerful the written word can be.  One day back in 1983 a teenage boy bought a used book at the Toronto Library.  He took it home and devoured the words.  He immediately discovered that he had a lot in common with the writer of the book.  They were both Black, both from the area, both from humble roots.

Lesra loved the book so much that he gave it to his housemates to read, including a lawyer.  He sat down and wrote a letter to the writer, introducing himself and commending him for his book.  Soon, Lesra took a train to and met the writer who was serving time in jail.  It turned out that the writer was a former boxer who was convicted of a triple murder that he claimed he did not commit.  He had spent his early years in prison writing his life story to explain what had really happened.  However, the establishment did not believe him.  His case became a “cause celebre” for certain celebrities, though, including Bob Dylan who wrote a song about the conviction.  The boxer was front page news for a few months.

However, the headlines soon changed and the boxer was forgotten, languishing in prison.  He would sit in his jail cell, night after night, typing on his typewriter his life story, including the events that transpired the night of the murders.  When the jail guard came to inspect his cell, the boxer’s manuscript was off limits.  He had given up his freedom and he certainly wasn’t giving up that manuscript!  Page by page, chapter by chapter, he poured out his story.  Although he had little formal education, he was a great storyteller, something the reader quickly discovered upon reading his book.  A second trial brought a second conviction.  The boxer tried to resolve himself to the strong possibility that he might be in jail for life.

Then he got a letter from Lesra.  They struck up a friendship and before he knew it, Lesra and three of his housemates were on their way to to help the boxer.  They moved into a hotel near the prison and set to work researching his case in the hope of securing another trail.  Despite intimidation from locals who wanted to preserve the status quo, the three Canadians worked tirelessly to seek justice for the boxer.

Incredibly, after several months, the do-gooders got their wish.  It had been almost twenty years since the original murders in 1966 and some witnesses had died in the meantime.  Fortunately, the boxer would have a new judge this time who seemed willing to listen.  In 1985, the boxer stood trial for a third time.  He received an innocent verdict!!!  The judge ruled that the original conviction had been based on racial prejudice.

That boxer’s name is Rubin “The Hurricane” Carter and his book is titled The Sixteenth Round.  His story was made into a movie starring Denzel Washington called “The Hurricane” in 1999.  Rubin Carter has gone on to champion the cause of other wrongfully convicted individuals.  He lives in and does speaking engagements in .  He walks free now because he had the courage to tell his story.  Never underestimate the power of the pen.

P.S.  I should mention that the teenage boy, Lesra Martin, who bought the book at the Toronto Library went on to become a lawyer himself. 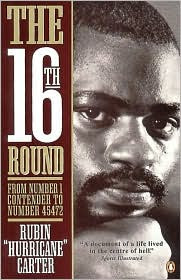