A few years ago an American professor named Randy Pausch, suffering from pancreatic cancer and knowing he might only have a short time left to live, penned an autobiography called The Last Lecture.  One chapter of his book was titled "The 100,000 Salt & Pepper Shaker".  As a child, he visited Disney World with his family.  He and his sister purchased a $10.00 salt and pepper shaker set for their parents' wedding anniversary.  Rushing out of the gift shop, Randy dropped the set and it shattered in pieces.  Returning the broken purchase to the shop, the Disney staff immediately gave him a new set, no questions asked.  Randy's parents never forgot this kind gesture and proceeded to return every year for many years with underprivileged children from their church.  Mr. Pausch calculated that he spent at least $100,000 during those visits to Disney World.  All because of a $10.00 salt and pepper shaker.

This kindness was also evident when my husband Rob visited Disney World with his family in the 1970's.  After a day at Magic Kingdom they climbed into their station wagon only to find that it would not start.  Within minutes a Disney worker was there to give them a boost, no questions asked.

Recently, I visited Disney World with my own children for the third time.  At our cafeteria hotel, we purchased Mickey Mouse plastic mugs with lids.  However, we misplaced one of the lids.  I approached a young worker named Thittipong from Thailand who spent a few minutes asking cashiers if they had an extra blue lid in their till.  He found pink and yellow lids, but no blue lids.  I thanked the man anyway and walked away.  No more than five minutes later he found me at my table and gave me a blue lid.  I was very grateful and gave him a big smile.

Another day, we found ourselves at the Magic Kingdom.  We had experienced a full day and gone on twelve different rides.  We had just eaten supper at the Crystal Palace and were considering staying into the evening for the fireworks.  However, my husband suddenly discovered that he had misplaced one of our passes to the park.  Our waiter warned him that the passes can be used as credit cards as well and that we must cancel it immediately.  We hurried over to the Town Hall, weary now from all the walking we had done and ready to return to our hotel and flop into bed.  At the Town Hall, we received a warm greeting from a nice looking young man who reassured Rob that the card would be cancelled immediately and that he would issue us a new card free of charge.  Within minutes, the situation was rectified and all of a sudden Rob had energy to spare.

We decided to stick around, met up with a family from our church and went on a few more rides.  At sunset, our two families stood on the bridge and watched the fireworks fly over the Cinderella castle.  I turned to my friend and said:  "You get such a life affirming feeling when you're in Disney World."  After the fireworks, we said goodbye to our friends and to the Magic Kingdom, knowing that it likely wouldn't be our last visit. 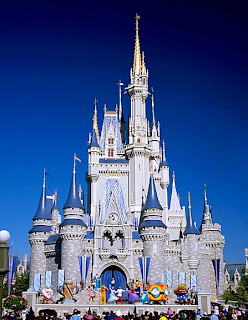