The blue-eyed little girl skipped up to the school in her black, white and pink peasant blouse and black tights. A little blonde girl, her hazel eyes wide with excitement, met her at the door and motioned her to come in. Inside the gym, a small group of parents, grandparents and siblings had gathered. The piano teacher welcomed everyone. She introduced the first pianist who played her piece. Then, a young girl played "Indian Boot Camp", showing poise beyond her years followed by a small boy who played "Russian Sailor Dance". To switch it up, the teacher told a joke about "playing by ear". A couple of other students played their pieces. Then it was the girl with the peasant blouse's turn. She walked up to the piano with her head held high, sat down and opened her piano book to "Come See the Parade". Her older brother hastily turned on the video camera and pressed record. His subject carefully found her starting note and began to play. Her little fingers deliberately located each note. Her chestnut-coloured bun bobbed as she counted out the rhythm. Her composure never faltered. As quickly as it started, the parade came to an end. The little girl stood up, closed her book and walked back to her seat, a pleased smile spreading across her face. Her brother turned off the cumbersome video camera and quickly put it back in it's case, embarrassed to be using such a dinosaur-like model. I, her mother, breathed a sigh of relief, glad that she was finished and had made no mistakes. Many other pianists followed. Towards the end of the recital, the pieces became more complicated. We, the guests, were treated to a duet. The final piece, performed by a tall slender teen, was not just played, but delivered with gusto. To end the evening, the teacher invited all of her students up to the front and they took a bow, albeit at different times. Heartfelt applause followed. How far they've come in such a short time. Bravo! 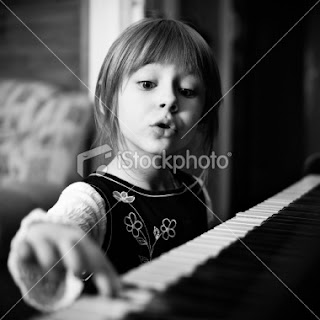