It was on this day in history that a mail pilot set out to win the Orteig Prize by making the first solo filght across the Atlantic Ocean.  In May of 1927, Charles Lindbergh climbed into a small plane complete with 3 sandwiches, 2 canteens of water and 451 gallons of gas.  He took off from Long Island, New York and landed in Paris, France on May 21, 1927.  During his flight, he often battled fatigue and flew so close to the ocean's surface that he could often feel the sea water spray his face.  When the sky was clear, he could see the icebergs jutting out of the ocean.  When visibility was poor, and he encountered storm clouds, he was forced to fly above or around them.  In total, he covered over 3500 miles and the trip took him 33 1/2 hours to complete.  Once over Europe, he passed Ireland, England and then hit France, circling around the Eiffel Tower at 4000 feet.  He landed his plane in a sea of people, all waiting to get a glimpse of the hero.  For his successful flight he received a cheque for $25,000.  According to Lindbergh, he "was astonished at the effect his successful landing had on the nations of the world.  It was like a match to [him] lighting a bonfire."  He went on to win the Congressional Medal of Honor.  He served as a technical advisor to the United States Air Force during World War II.  What an exciting life he led.  And it all started with 3 sandwiches, 2 canteens of water and 451 gallons of gas. 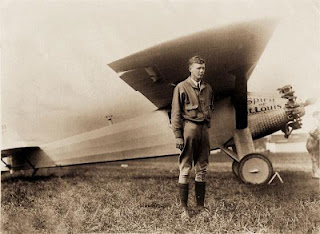