I was never a haggler. In fact, I am a people pleaser and therefore I usually don't question cashiers or salesmen -- I just buy the product. I do, however, look for items on sale. In fact, if my son sees a new item in our grocery bag, he says: "Let me guess. It was on sale."

This past week that all changed. I made it my mission this week to find a new van. I visited our local Chrysler dealer and asked for a quote. The salesman, a nice enough fellow, gave me a quote. He took down my name and number. Urging me to take the car for a test drive, I considered doing so but decided I better play it cool. I told him I would get back to him in a couple of days.

In the meantime, I checked out a Hamilton Chrysler dealership to compare prices. It turned out their prices were the same and I later discovered that they were owned by the same person. Then, I went to the bank and one of the workers there gave me the name of a Mississauga dealership with the slogan "You can't beat a deal at Peel". So, I e-mailed the dealer. He responded with the news that he had no basic vans, but that he had the next step up model and would give it to me for the same price.

I was all set to drive to Mississauga. However, my husband is on the road 3 hours a day for his job and was not relishing the thought of driving on his day off. I decided I'd go on my own and even printed out a map with directions, but at the last minute I decided to give Brantford another shot. The salesman, happy to see me, started crunching numbers. I said that I would take the van if he could keep the price under a certain amount. He nodded his head. He excused himself to consult with the manager. After a lengthy wait, he returned with an offer for $500 over my figure. Fighting the urge to agree, I politely reminded him of the original figure and suggested that he wave the administrative fee which was $525. He asked me to work with him but I reminded him that I could still get a better deal in Mississauga. He again talked to the manager who quickly returned and said that I had myself a deal. I was thrilled!

We pick up our new van this week. There's no better feeling than to know you have gotten a good deal. Perseverance pays off. Comparison shopping pays off. And not acting desperate pays off. This will be good practice for the next big item we purchase. And in the end, instead of pleasing the salesman, I pleased my pocketbook. 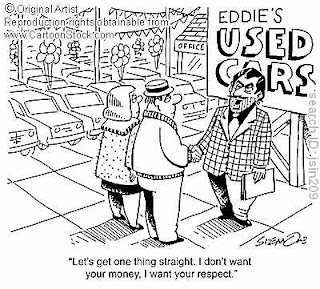