Just as St. Patrick made the shamrock into a Christian symbol he did the same with the Celtic cross.  He took an ancient symbol of the sun and combined it with a Christian cross to form the Celtic cross.  Across Ireland, Scotland and England, one can find Celtic crosses in many cemeteries.  The Celtic cross had a practical component too; the circle strengthened the cross beams preventing breakage or destruction.

Early Celtic crosses, circa 600 AD were simply carved out of rock.  By the 8th, 9th and 10th Centuries, high crosses became common to honour famous people or places.  The Cross of the Scriptures, or King Flan's Cross, is inscribed with images of the Bible:  the Last Supper, the Crucifixion and the Guarding of the Tomb.  By the 1850's, it became common to use Celtic crosses as tombstones, a tradition continued in North America and Australia where Irish or Scottish immigrants have settled. 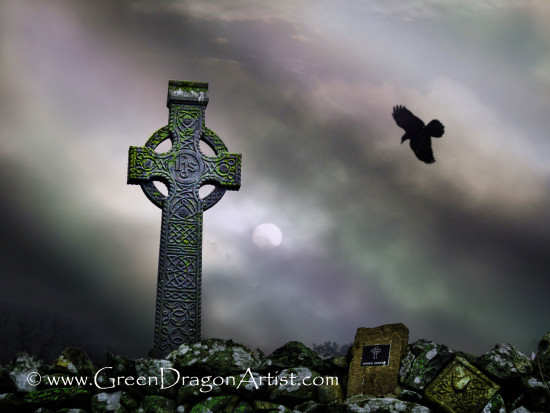