4.  Its highest cliffs are found on the northern coast at Achill Island, County Mayo, an area which suffered an earthquake in 2012.

5.  The longest river, Shannon, flows 204 miles before pouring into the Atlantic Ocean at Limerick.

7.  The largest lake, Lough Neagh, measures 153 square miles and supplies Ireland with 40% of its water.

8.  Ireland consists of four provinces broken up into 32 counties, six of which are part of Northern Ireland.

9.  The mountains are composed of granite, sandstone, limestone, karst and basalt.

10.  Ireland has 4,633 square miles of bogland consisting of blanket bogs and raised bogs. 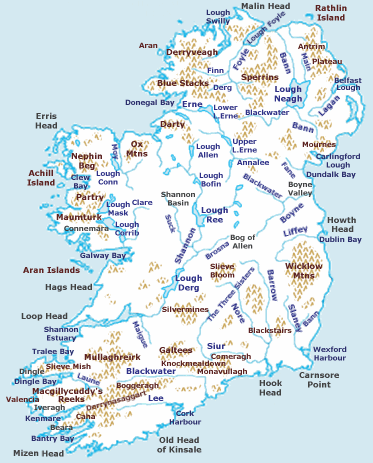 https://en.wikipedia.org/wiki/Geography_of_Ireland
Posted by Unknown at 15:45