Kilkenny Castle was first built in 1172 under the Anglo-Normans.  James Butler, the 3rd Earl of Ormonde, purchased the castle in 1385.  The castle was featured in the reconquest of Ireland in 1650 as well as in Ireland's Civil War in 1922.  William Marshall, one of the most successful and fearless Norman knights, took over the property and built a stone castle to replace the wooden one in 1213.

Thousands of tourists visit Kilkenny Castle every year and they notice that one of its four walls is missing.  The eastern wall, along with the northeastern tower, were blown to bits during William Cromwell's siege in 1650.  William Cromwell, a devout Protestant, was bent on reconquering the predominantly Catholic island.  In the bloody battle, anywhere from 15 to 50% of the Irish population was wiped out.  Although James Butler was Protestant, his castle was seized and used as the Parliament of the Irish Confederate.

Butler, who was exiled to France, returned later to his castle with plans to restore it along the lines of a chateau.  His descendants, however, decided to demolish the castle's chateau elements in the 20th Century and return the structure to its medieval roots. 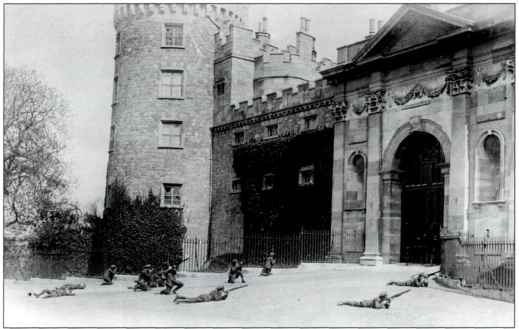 In 1922, Kilkenny Castle was again seized, this time by the Republican forces during the Irish Civil War.  Twenty two men, armed with rifles and bombs, descended on the Butler family.  The siege ended two days later when Free State forces crashed a car into the castle.  While the structure sustained significant damage, no one was hurt.

In 1935, with the Butler family in financial straits, they abandonned the castle and moved to London. Fjor thirty years, the castle fell into a state of disrepair.  Nature started to reclaim it.  In the 1960's, the Butler family sold the castle to the Irish Ministry of Public Works for the nominal sum of 50 pounds. It reopened in 1967 as a museum and hosts about 185,000 visitors each year.