At the foot of the McGillicuddy Reeks, Ireland's highest mountains, are nestled the Killarney Lakes.  Here lies a 26,000 acre filled with woods and waterfalls, red deer and red squirrels, called Killarney National Park.

One of the highlights of the park is Ross Castle, built by O'Donohue Mor in the 15th Century.  Later O'Donohue leased the land to the Brownes, later the Earls of Kenmare.  Ross Castle was one of the last to be taken by Oliver Cromwell's Roundheads during the Irish Confederate Wars.  The Roundheads marched to the castle with 4000 soldiers and 200 horses, but it wasn't until artillery arrived via the River Laune that the castle was finally taken.  In 1688, the Brownes erected a mansion near the castle but were exiled due to their allegiance to James II of England.  The castle became a military barracks while the Brownes built Kenmare House to reside in.  A group of American businessmen bought the castle and a large part of the Kenmare estate in the 1950's, intent on developping the area.  However, they sold the castle to the Irish state for a nominal fee and, in the 1970's, renovations began.  The castle reopened to the public in 1991.

Torc Waterfall, about five miles from Killarney, is another popular destination for tourists.  Fed by the Owengarriff River, it rises 70 to 80 feet high.  Tourists can climb a set of 100 steps to get a view of the lakes below. 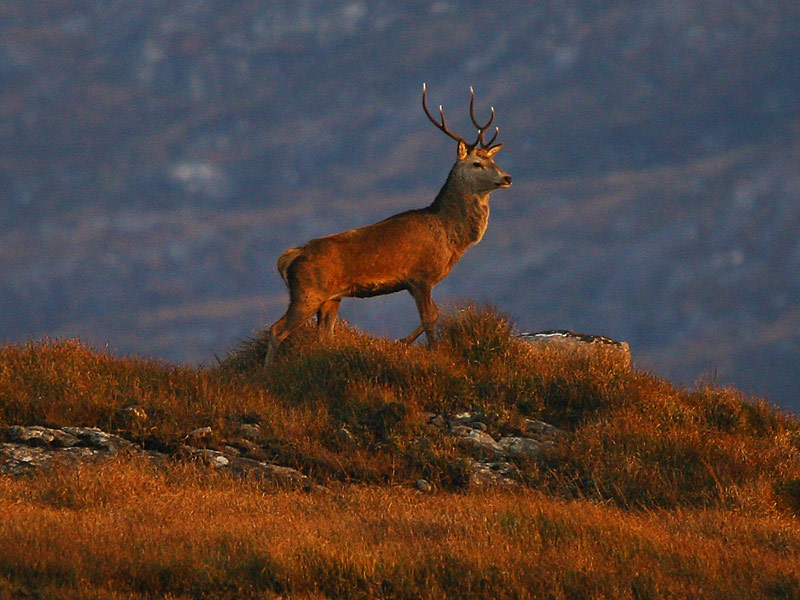 
The Oak and Yew Woodlands encompass 30,000 kilometres, much of which falls in Killarney National Park.  Oak and beech trees are prevalent in the woods, home to Ireland's only native red deer.  Birds native to the area are European robins and wrens while mammals include badgers and foxes.  The highlight for many is the red deer.

Three lakes provide a breathtaking view for tourists including Muckross Lake, Upper Lake and Lough Leane.  River Laune, the waterway used by Cromwell's Roundheads in the 15th Century, flows out of Lough Leane.  Muckross Lake boasts many large natural caves carved out of the limestone.  Brown trout and salmon populate the lakes, a popular site for sport angling.

The Purple mountains viewed from the Upper Lake courtesy https://en.wikipedia.org/wiki/Killarney_National_Park.
Posted by Unknown at 10:13