The Hindenburg, a German airship, crashed at Lakehurst, New Jersey on July 2, 1937.  Here are nine facts about the dirigible.

2.  The USS Akron airship suffered a more deadly fate with 73 dead and only 3 survivors.

3.  The accident was not broadcast live on the radio, although there was a reporter there to broadcast its arrival.

4.  U.S. law prevented use of helium; the airship was filled with hydrogen instead.

5.  The Hindenburg had a smoker's lounge on board.  However, passengers were only allowed to light up in a special hydrogen-free room.

6.  A lightweight piano, weighing less than 400 pounds, was used during the first year of the zeppelin's operation.

7.  The Hindenburg's first mission was a March 1936 trip around Germany spreading Nazi propaganda leaflets and Swastika flags to rally support for occupation of the Rhineland.  The dirigible also flew over the Olympic Stadium in Berlin that summer during opening ceremonies.

8.  Of 17000 pieces of mail on board the airship, 176 were still delivered to their addressees.  They were still legible, although some were charred.

9.  Goebbels wanted to name the airship after Adolph Hitler, but Eckner was not a fan and chose Paul von Hindenburg, the late German President, as its namesake. 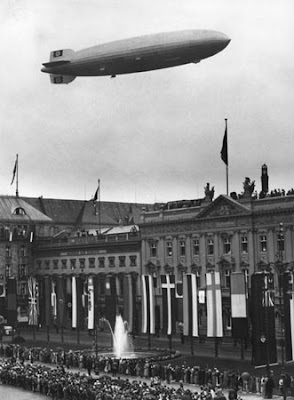