The Orphan & the Widow

"Religion that God the father accepts as pure and faultless is this:  to look after the orphan and the widow in their distress..." (James 1:27)

Canadian Gary Skinner moved to Uganda in 1980.  Eight years later, he met a widow who showed him the graves of her husband, along with six out of her seven children, all of whom had died of AIDS (her seventh child was dying of the disease).  He was horrified to learn that one million of Uganda's residents had perished due to years of senseless wars supported by corrupt governments. He vowed then and there to do something about the devastation and started a congregation called Watoto Church.

Out of Watoto Church grew the Watoto Children's Choir which formed in 1994.  The choir gives Ugandan children, orphaned due to AIDS, war, poverty and disease, the chance to spread the Gospel through song.  These children are accompanied by adults who care for them and sing with them while they are on tour, their Watoto "Moms" and "Dads".  The joy on the faces of the Watoto Choir members is obvious.  Despite having lost their parents, despite coming from a life of poverty, they appreciate life's smallest blessings.

They tour all over North America for six months at a time.  About seven years ago, I had the opportunity to hear them sing at Evangel Church in Brantford with my son Thomas.  Tonight, my daughter Jacqueline and I heard them perform at the Baptist Church in Paris.  This is the 53rd Watoto Children's Choir:  some things have changed, including many of the choir members; however, some things have not changed, given that they still exude the same joy.  Jacqueline listened attentively to the choir's music and their story.  Later she got to meet some of the children including a couple of 8 year old girls like herself.  What a moving performance! 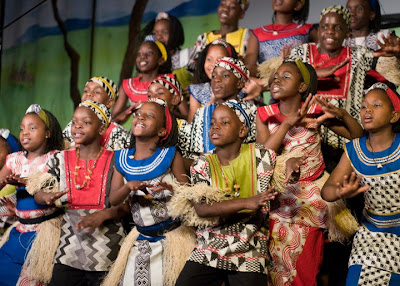