When I turned 30, I discovered classic films including one starring Gregory Peck and Audrey Hepburn called "Roman Holiday" (1953) which is an excellent movie.  Here are ten things you may not know about Italy's capital.

2.  The Capuchin Crypt consists of five chapels and a 60 metre long corridor.  It is decorated with the bones of 4000 deceased monks.  The word "cappuccino" comes from "cappucio" which were the hoods of the habits worn by these monks.

3.  Rome's million-plus population was unmatched in Europe until London overtook it in the late 19th century.

4.  The word "decimate" is derived from the Latin verb "decimare" which refers to the practice of killing every 10th Roman soldier if there was a mutiny.

5.  On the day the Colosseum opened 5000 animals killed.  During its history, 500,000 people and over a million animals were killed within its circular walls.

7.  Romans were highly superstitious, especially concerning the left (the Latin word was "sinister", a word that the English language has borrowed).  A left-handed person was called "sinistra" and was forced to write with his or her right hand.

8.  Crimes like treason or desertion were punished by a beheading.  Only "criminals" without Roman citizenship, like Jesus, were crucified, since this punishment was so slow and painful.

9.  After Rome fell, Latin continued as a dialect, developping into the Romance languages of Spanish, Italian, French, Portuguese and Romanian.

10.  "The Mouth of Truth", a landmark featured in "Roman Holiday", was likely an ancient manhole.  It is considered to be a lie detector by Romans:  if you put your hand in it and tell a lie, it supposedly chops your hand off.  Other landmarks featured in the 1953 movie are the Spanish Steps (138 of them), the widest staircase in Europe, and the Trevi Fountain, the largest fountain in the Eternal City, which tourists throw coins in to guarantee them a return trip to Rome.

So here is some food for thought if you are planning your own Roman Holiday.  "Buon Viaggio!" 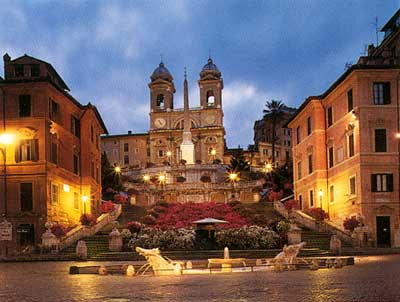