Decades before 9/11, long before the were built, a plane crashed into the .  No, it was not the work of terrorists.  It was simply pilot error on a foggy day.  It was not a jumbo jet, but rather a World War II bomber.  It did not collapse the tower but instead incurred minor damages.


Lieutenant Colonel William Franklin Smith Jr., Staff Sergeant Christopher Domitrovich and Albert Perna were on board.  The pilot lost his sense of direction in the fog, and despite being denied clearance to land tried to do so anyway.  The B-25 bomber crashed into the between the 78th and 80th floor.  Miraculously, the Fire Department was able to contain the fire which the crash sparked.  Rescue workers were able to save an elevator operator who was put on the elevator to be evacuated and it plunged 75 stories, but she survived.  Sadly, eleven people died in the crash including the three crew members and eight people in the building.


Many floors were still open for business the following Monday despite the damage from the crash. 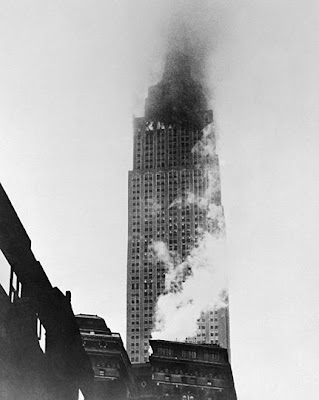