When my husband Rob was growing up, he and his sister Ingrid would spend hours playing with their Fisher-Price toys.  They enjoyed the castle with the trap door, accompanied by a chevalier, a king, a queen and other figurines.  They also played with the garage, rolling the green, blue, red and yellow cars down the ramp.  Rob and Ingrid also had an airport complete with an airplane, a helicopter and baggage carts.  They played with a two-storey blue house with white stripes and a yellow roof, and flower boxes under each window.  The brother and sister also had a red brick schoolhouse complete with a tower and bell.  Lastly, they also spent hours on their toy houseboat.

Rob's parents kept the toys until we married and bought our own house.  Then Rob inherited the house, castle, garage and airport.  Ingrid has the school and houseboat.  When my nieces Amanda and Cassandra used to sleep over at our house in the early to mid 1990's, they spent hours playing with the Fisher-Price Toys.  One day, Rob noticed that one or two of the figurines were missing.

A few years later, our son Thomas was born and Amanda and Cassandra gave him some of their old toys.  In one of the boxes, were the missing figurines.  It was Thomas' turn to play with the house, castle, garage and airport.  Four and a half years later, Jacqueline came along.  Like Rob and Ingrid, Thomas and Jacqueline spent hours playing with the decades-old toys.

Tonight, we had a birthday party for Jacqueline and our nephews, Bo and Mason, were visiting.  Bo asked Jacqueline to get out the castle.  Baby Mason came crawling into the rec room.  He grabbed one of the figurines and dropped it down the trap door of the castle.  Another generation of children is hooked on the Fisher-Price toys! 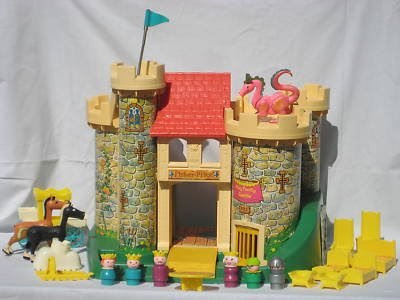