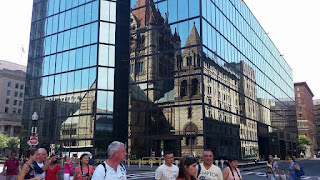 A marriage of old and new.  Trinity Church's reflection in side of John Hancock Tower (Boston's tallest) at Copley Square.  Photo circa August 2015 on our Boston bus trip courtesy my sister,
Laurie Candela.

Situated in Copley Square in Boston, it is where the Boston Marathoners cross the finish line each Spring.  It sits in an historic area of the city.  It is the only church designated one of the "Ten Most Significant Buildings in the United States.

Designed by Richard Hobson from 1872 to 1877, Boston's Trinity Church is the birthplace of Richardsonian Romanesque style.  The magnificent structure features a clay roof, rough stones, heavy arches, and a massive tower.  An exterior staircase is fully covered.  The sanctuary is surrounded by several stained glass windows.  The pipe organ contains 121 stops, 113 ranks and 6898 pipes.

Prominent funerals and consecrations have taken place at Trinity as well as special services after 9/11 and the July 2005 London bombings.

https://en.wikipedia.org/wiki/Trinity_Church_(Boston)#/media/File:Trinity_Church,_Boston,_Massachusetts_LCCN2011630431.tif
Posted by Unknown at 16:11