"It did not take long before the first heavy grey stones came tumbling down and the children of the village amused themselves as they threw the stones into the many coloured windows.  When the first rays of a pale and cold November sun penetrated the heavy dark clouds, the little synagogue was but a heap of stone, broken glass and smashed up woodwork." (Eric Lucas, Kristallnacht) 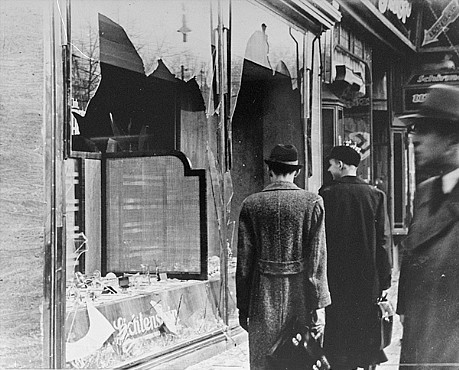 
Shards of broken glass lay in the streets.  Storefronts were shattered.  Synagogues were stripped. Schools were vandalized.  Homes were ransacked.  Cemetery headstones were toppled.  The date? November 9 & 10, 1938.  The place?  Nazi Germany and Austria.  The event?  Kristallnacht (http://en.wikipedia.org/wiki/Kristallnacht).

It all started over the murder of a German diplomat in Paris by a Polish Jew whose parents had recently been deported from Germany.  Hitler gave the order to Gauleiters and Stormtroopers to riot in German and Austrian cities.  Dressed in civilian clothing, they wielded sledgehammers, destroying 7,500 businesses, hundreds of synagogues, 29 department stores, countless Jewish schools and homes.  Local police and fire departments were told not to interfere.

Thirty thousand Jewish men were arrested and jailed.  At least 100 Jews (and some mistakenly identified non-Jews) were murdered and dozens of others committed suicide.  German newspapers were ordered to downplay "The Night of Broken Glass".  However, as for the foreign correspondents, "no German Jewish event between 1933 and 1945 was so widely reported" as Kristallnacht.

Most of the arrested Jews, who were sent to Concentration Camps, were let go on the condition that they leave Germany and Austria.  The Nazi government fined the Jews one billion marks for the death of the German diplomat.  They used it as an excuse to seize Jewish property and insurance settlement money received after damaged incurred on November 9 and 10.  Many historians consider Kristallnacht to be the start of the Holocaust.