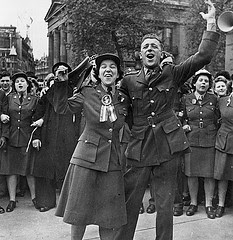 
Anthropologist Tom Harrison returned from the South Pacific after observing the habits of cannibals there and discovered that people were just as interesting in his native country of Britain.  So  he organized a Mass Observation Project which included 1000 participants who wrote 1 million pages over the space of two and a half decades.

Author Simon Garfield studied the Mass Observation diaries and zeroed in on the postwar period.  The result is the book Hidden Lives:  The Everyday Diaries of a Forgotten Britain 1945-1948.  We have all heard about how vicious the London Blitz was.  And we have all heard about V-E Day where Londoners danced in the street to celebrate the end of the Second World War.  However, the victorious British did not feel like the victors in the postwar years.  The country went out of the frying pan into the fire:  unemployment skyrocketed; food rationing remained in effect; long queues formed to buy basic items; German POWS walked the streets looking for work; the threat of a third world war loomed; and air pollutioin was worse than ever, especially due to coal furnaces.

This is the world that the following five real-life characters inhabit:  B. Charles, a snobbish, anti-Semitic antiques dealer; Maggie Joy Blunt, a 30-something freelance writer; George Taylor, a prim and proper accountant; Herbert Brush, a retired electrical engineer who creosotes his garden; and Edie Rutherford, a housewife.  These Britons write about everything from the Nuremburg Trials to the wedding of Princess Elizabeth and Phillip Mountbatten to the assassination of Indian leader Mahatma Ghandi.  On the other hand, they discuss such mundane issues as treating a nasty boil or lining up to buy tripe or redecorating a living room.

It is a fascinating book about a neglected period in Britain's history.  If you would like to learn more about the Mass Observation Project, visit www.massobs.org.uk. 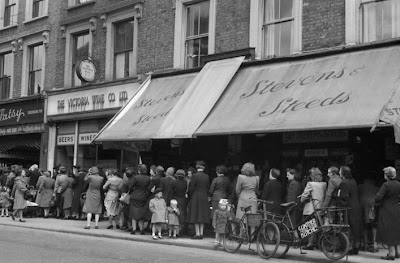