The River Lea meanders through it, wildflowers lining its banks, ducks floating along its waters.  You could close your eyes and imagine you were in the countryside.  However, you are in Olympic Park in London's , only five kilometres from downtown.  The Olympic Park stands on 2.5 kilometres of reclaimed land which has been completely renovated.  In 2007, Olympic workers began excavating the area:  they tore down 52 power towers, 200 buildings and removed tonnes of garbage which had been accumulating since the start of the Industrial Revolution.


At 30 feet down, they found a Victorian street.  It’s almost like all over again.  Although they did not find any bodies, I’m sure they found some interesting artefacts.  It would be interesting to imagine what that neighbourhood looked like in 1948 during the last London Olympics.  Who walked its rubble ridden post-Blitz streets?  War veterans?  Businessmen?  Shoppers?  Who lived in its houses?  Who worked in its businesses?  Who rode its busses?  How many homeless people walked its streets?  Or what did it look like during the London Olympics of 1908?  Who walked the banks of the River Lea?  Who fed the ducks as they swam by?  Who lived in its tenements?  Who worked in its factories?  Who operated its trolley busses?  Who lit its streetlamps?  How much coal smoke hung in the air?  How many “street arabs” roamed its alleyways?


The of 2012 is coming alive today with the opening ceremonies of the Olympics.  The Olympic Stadium, home to 8 venues, will be filled with 80,000 spectators.  The Olympic Village will house 17,000 athletes.  Adjacent to it will be acres of green space.  For a fortnight, will be host to hundreds of nations.  And once the closing ceremonies take place, and the athletes go home, they will dismantle Olympic Park (some not all).  The lower tier of the stadium will remain as a community centre.  Half of the Olympic Village units will be converted to social housing.  A new generation of Londoners will occupy the .  The Games have breathed new life into a dying neighbourhood. 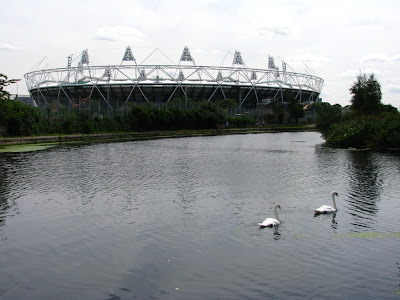