After V-E Day, Walt set to work making sketches of his Magic Kingdom which would include five different lands:  Main Street USA, Adventureland, Tomorrowland, Fantasyland, Frontierland.  The entrepreneur soon realized that 8 acres of land was insufficient for his park and he decided instead on a 100-acre orange grove near Anaheim (25 miles southeast of Los Angeles).  Building started in July of 1954.  With the park almost complete, Walt invited his family and friends to come and celebrate his 25th wedding anniversary.

Invitations for the opening day at Disneyland were mailed out to 6,000 people.  On July 17, 1955, however, 28,000 people showed up at Disneyland, many with counterfeited tickets.  A series of mishaps followed:  the staff ran out of food; most of the fountains did not work on a day where the thermometre hit 110 degrees Fahrenheit; a lady got her high-heeled show stuck in the freshly poured asphalt on Main Street USA; and the Mark Twain steamboat almost capsized due to overloading.

Even so, people continued to come through the gates of Disneyland everyday and enjoyed the many attractions including:  the Sleeping Beauty Castle, Mr. Toad's Wild Ride; Snow Whites' Adventures, Space Station X-1, Jungle Cruise, Tea Cup Ride, Stage Coach Ride and the scenic railway.  Walt Disney's $17,000,000 amusement park would see 50 million visitors by the end of its first decade.  What a feat for a cartoonist who was once fired from a newspaper job due to lack of creativity! 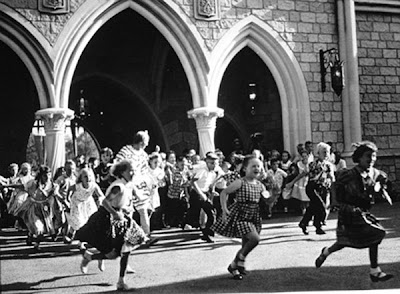