“It was .  Somewhere on the endless expanse of the Pacific Ocean, Army Air Forces bombardier and Olympic runner Louie Zamperini lay across a small raft, drifting westward…A month earlier, twenty-six-year-old Zamperini had been one of the greatest runners in the world, expected by many to be the first to break the four-minute-mile…Now his Olympian’s body had wasted to less than one hundred pounds and his famous legs could no longer lift him.  Almost everyone outside of his family had given him up for dead.” (Unbroken, Laura Hillenbrand, pages xvii-xviii)


A New York Times #1 bestseller, Unbroken tells the story of Louie Zamperini, an Italian-American who was a restless child, often getting into trouble for stealing, but who channelled that energy into running when he reached his teens.  He earned the nickname the “Torrance Tornado” as he beat rival after rival.


In 1936, Louie sat in the Olympic Stadium in watching the Hindenburg float by during the opening ceremonies.  During his stay, he met fellow American Olympian Jesse Owens.  Competing in the 5000 metres, he just missed 7th place, and ran his final lap in 56 seconds.  After the race, Hitler shook his hand and commented in German:  “Ah, you’re the boy with the fast finish.”


On , the crew took off on a rescue mission to .  However, they suffered engine damage in the air and crash landed into the .  All eleven crew members perished instantly except Louie, the pilot Russell Allen Phillips (Phil) and the tail gunner Francis MacNamara (Mac).  For the next several days, the trio floated on two rafts on the Pacific, fighting the blazing sun, the man-eating sharks, dehydration and starvation.  Their limited chocolate supply was depleted when Mac stole a chunk of it and ate it.  They tried desperately to catch fish, but without success.  One day Louie caught an albatross, broke its neck and they ate it (even though it gave off a putrid odour).


On the 27th day, the trio was thrilled to hear the engine of a small plane approaching.  They fired a flare to signal the pilot of their presence but the plane passed by; later it returned, firing on the rafts.  The men saw the red circle painted on the plane’s bottom and realized it was a Japanese bomber.  For the next several minutes, the refugees desperately tried to escape the hail of bullets; Louie jumped into the ocean where he ended up fighting the sharks.  Although none of the men was injured by the bullets, their rafts were:  one raft was totally destroyed and they lost their precious supplies on it; the other raft was so riddled with bullets that they spent the next several hours bailing water out of it and patching its holes.


By the 40th day, Louie heard a choir of 21 members singing a beautiful hymn; however, Phil had heard and seen nothing, making Louie realize he was hallucinating.  Sometime after that Mac, so weak he could not sit up, passed away.


Just when they thought they could take no more, Louie and Phil spotted an island in the distance which grew closer and closer.  It had been 46 days since they had ditched the Green Hornet.  They would finally find civilization again!  However, approaching the “island” they realized it was a ship.  Sadly, it was not an American ship but a Japanese one.  Once aboard, the men were given food for a few days and then sent to a POW camp.


It was not just any POW camp but a camp where they were interrogated for enemy secrets.  Louie and Phil refused to reveal anything.  They were held captive for over 2 years in which time they were dehumanized in every way by the guards.  When care packages arrived for the emaciated prisoners via the Red Cross, the Japanese guards would tear them open and gorge themselves on their contents.  The prisoners gave nicknames to each guard, calling a particularly vicious one “The Bird”.  At one point, Louie and other enlisted men were working on a barge when it was discovered someone had stolen fish from the galley.  As punishment, the Bird made each of the 100 workers punch each other in the face 220 times.  Battling starvation was a constant struggle as well as enduring the belittlement of the guards.


Through it all, Louie remained “unbroken”; he refused to break to the will of “The Bird”.  He never gave up and finally, on , Louie’s mother cried tears of joy as she learned her boy was alive and was coming home!  September 9 became her new Mother’s Day.


Back home, Louie intended on training for the 1948 London Olympics but he re-injured his heel (a POW injury) and he was forced to bow out.  However, he did meet a beautiful woman named Cynthia Applewhite whom he married and had a little girl with.  It was not happily ever after for Louie and Cynthia though as he battled regular nightmares starring “The Bird”.  Louie lashed out at those around him and turned to the bottle for solace.  Eventually Cynthia could not take his outbursts anymore and she left with the baby.  However, she did return after a few months to pack up her belongings.


A funny thin happened, though.  A young man visiting  (near where Louie grew up) had pitched a large tent and invited everyone to come and hear him speak.  Part of a religious revival, he was drawing crowds by the thousands.  His name was Billy Graham.  Louie and his wife’s neighbours in their apartment building had heard him speak and they were going for a second night, hoping that the Zamperini’s would accompany them.  While Louie was not interested, Cynthia agreed to go.  After one night she was hooked and she told Louie that she no longer wanted to divorce him.  She urged him to come with her to hear the young evangelist.  At first Louie refused, but eventually he gave in.  After one meeting he was curious; after two, he was hooked.


No longer was he trapped by “The Bird”; he let of his anger and he forgave him.  He let go of the bottle.  He started living again.  Billy Graham had brought him to Christ. 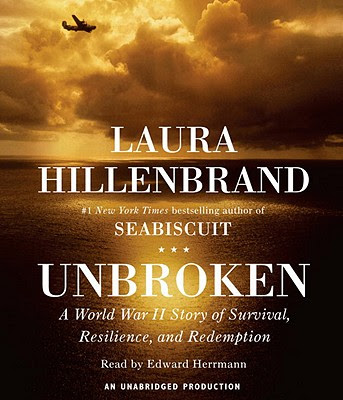