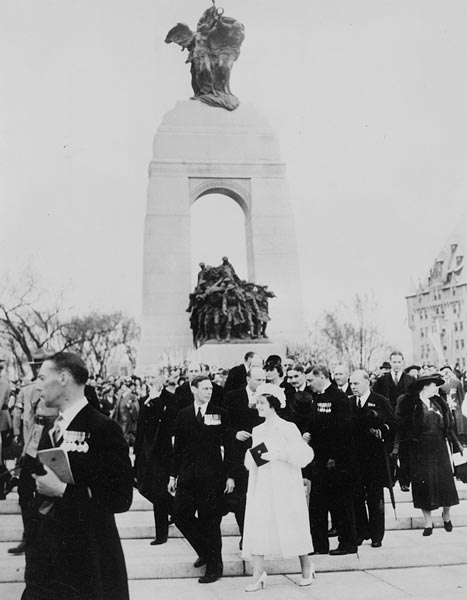 Prime Minister McKenzie King had a vision for Ottawa.  He wanted it to look more like another capital city, Washington DC, with its grand boulevards, beautiful parks, massive monuments and Beaux Arts architecture.  In 1937, he hired Jacques Greber to redesign the city.  A gaping hole had formed in Ottawa's downtown after the Russell fires (1928) and the demolition of the old City Hall (1931).  Greber thought the war monument would be the perfect object to fill the hole.  The post office and Knox Church were also torn down, making even more room for the massive monument.

In 1925, a competition was held to determine who would design the monument.  The following year, Englishman Vernon March's entry "The Great Response of Canada" was selected as the winner. Vernon started sculpting the figures but passed away in 1930.  His six brothers and one sister completed his sculpture, displaying it in Hyde Park for six months in 1933.  A contract was awarded to Cape and Company to build the granite pedestal for the sculpture, completed in 1938.  Jacques Greber was hired to oversee the design of the walkways and terraces surrounding the sculpture.

The First World War Memorial was officially unveiled by King George VI on May 21, 1939, part of the Royal Visit to drum up support for the brewing war in Europe.  One hundred thousand spectators gathered to hear King George's speech.

"The memorial speaks to her world of Canada's heart...It has been well named 'The Response'.  One sees at a glance the answer made by Canada when the world's peace was broken and freedom threatened in the years of the Great War.  It depicts the zeal with which this country entered the conflict."