The rime royale, or rhyme royal, was popularized by Geoffrey Chaucer in the 14th Century.  His imitator, James I of Scotland, also used it in his own verse; hence, the term "rime royale".  Each stanza of the rime royale consists of seven lines, each of ten syllables.  The rhyming scheme is: ABABBCC.  See Troilus and Criseyde (http://www.poetryfoundation.org/poem/173193).  Sir Thomas Wyatt composed They Flee from Me, also a rime royale, in the 16th Century (http://www.poetryfoundation.org/poem/174858).


They flee from me that sometime did me seek
With naked foot, stalking in my chamber
I have seen them gentle, tame and meek,
That now are wild and do not remember
That sometime they put themself in danger
To take bread at my hand; and now they range,
Busily seeking with a continual change.

Thanked be fortune it hath been otherwise
Twenty times better; but once in special,
In thin array after a pleasant guise
When her loose gown from her shoulders did fall
And she me caught in her arms long and small;
Therewithall sweetly did me kiss
And softly said, "Dear heart, how like you this?"

It was no dream; I lay broad waking.
But all has turned thorough my gentleness
Into a strange fashion of foresaking;
And I have leave to go of her goodness,
And she also to use newfangleness.
But since that I so kindly am served
I would fain know what she hath deserved.

The rime royale went out of favour for a couple of centuries, but reappeared in the 19th Century. Byron popularized the "ottava rima", an 8-line stanza variation on the rime royale.  W. B. Yeat's A Bronze Head is a 20th Century rime royale (http://dversepoets.com/2011/07/28/formforall-rhyme-royal/). 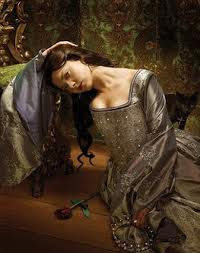