How Could You, Mrs. Dick? 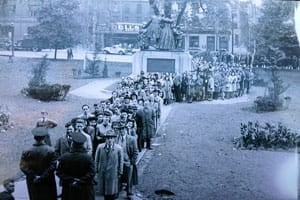 
The lineup outside the Hamilton Courthouse, five abreast, snaked its way around the United Empire Loyalist statue and spilled onto the sidewalk.  Everyone was trying to get a view of the person on trial.  She had bright red lipstick, perfectly coiffed hair, a fur coat and a pillbox hat.  She looked like she could have floated off the cover of Vogue magazine.  Her name?  Evelyn Dick.  Her crime? Murder.

Hamilton in the 1940's was a small city known for its steel factories and hardworking citizens.  In 1946, scandal rocked the city when a group of five schoolchildren found a bullet-ridden torso on the Escarpment by Albion Falls.  Hamilton Street Railway car driver John Dick had gone missing.  It was believed to be his torso. 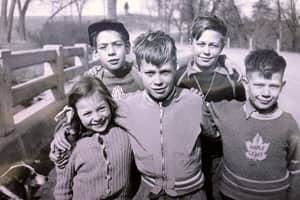 Schoolchildren who discovered the torso on the escarpment courtesy http://www.cbc.ca/news/canada/hamilton/talk/paul-wilson-saved-from-the-gallows-evelyn-dick-lives-on-1.1370508.


Evelyn Dick, who had been known to hold lavish parties at the Royal Connaught Hotel, and who had been known to sleep around, was called in for questioning.  Police had discovered that she borrowed a Packard from a fellow Hamiltonian which was later returned, the interior covered in blood.  What was the newlywed's immediate response to her husband's death?  "Don't look at me.  I don't know who did it."

Evelyn's father, Donald MacLean, also worked for the Hamilton Street Railway.  When she was younger, Evelyn had been known to make frequent shopping trips, with handfuls of nickels, the fee for a ride on the HSR.  People were suspicious that her father was dipping into the coffers of the HSR.

Mrs. Dick hired lawyer J. J. Sullivan to defend her during the 1946 trial.  Hamiltonians lined up outside the courthouse to get a glimpse of the villainess.  At one point during the trail, the prosecutor asked Evelyn how many men she had slept with.  "Was it 400?  300?"  "150 was her response.  And his son was one of them," she added, pointing to the judge.  After a short trail, Evelyn Dick was convicted of murder and sentenced to hang.

However, Mrs. Dick hired then unknown lawyer J. J. Robinette to launch an appeal.  Once again, Hamiltonians lined up outside the courtroom hoping to get a seat inside.  It was the talk of the town. J. J. Robinette was able to get an acquittal as a result of a technicality.  Her father, Mr. Maclean, did serve five years for his role as an accomplice, however.  It was suspected that he sawed the limbs from the body in his basement.

Just when Evelyn thought she would walk free, however, police made a gruesome discovery in her Carrick Avenue home:  a baby encased in cement inside a suitcase.  Once again, Mrs. Dick was on trial.  This time, the conviction stuck.  The villainess went to jail for the murder of her child.  While she was supposed to serve a significant sentence, she was released after only 11 years in the Kingston Prison for Women.  Her whereabouts since her release remain a mystery. 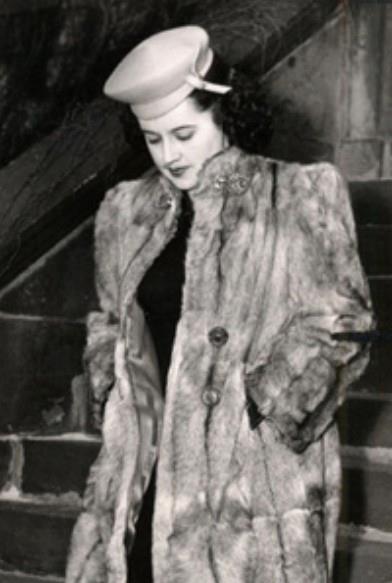 Note:  My great aunt Phyllis was one of the woman in line at the Hamilton Courthouse in 1946.  She stood out in the crowd since she was wearing a suit just like Evelyn Dick's.