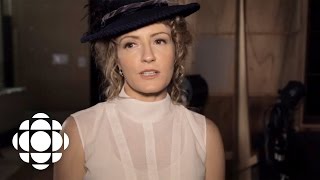 
A man murdered at a dinner at Toronto's Queen's Hotel.  A woman found floating in Toronto Harbour.  A brawl between dockworkers and the Toronto Constabulary.  A protest staged by new suffragettes at Queen's Park.


Today I watched my first episode of Murdoch Mysteries.  I wondered why I didn't start watching it in Season 1 rather than Season 8.  While I usually don't like murder shows, Murdoch focuses more on the mystery.  It is chock full of Canadian history.  Set at the turn of the last century, the Canadian TV series is based on a police detective named William Murdoch who solves crimes in Toronto.  He is engaged to a female doctor, surely one of the province's first, named Julia Ogden.  He is straitlaced and proper, indicative of Victorian times.  Crossing himself when he finds a dead body, Murdoch is a staunch Roman Catholic, something that might preclude him from a top position in the Toronto Constabulary, which is full of Protestants.

Murdoch's Canada is still a young country, not divided the way the country is today.  You couldn't find British Columbia or Newfoundland on Murdoch's map, but you could find Assiniboine and Athabasca.  It is still very British, the Union Jack flying outside its public institutions.  Murdoch's Canada still enjoys an innocence; it hasn't participated in the First World War.  At the same time, the gang activity down by the Toronto docks shows the dark side of its second biggest city.

I was pleased to discover that much of the Murdoch Mysteries episodes I watched, "On the Waterfront:  Parts I & II", were filmed in my hometown of Hamilton.  The directors found an old warehouse on Sherman Avenue North which served as the sight for much of the drama.  Queen's Park in Toronto, of course, served as a location for the suffragettes' protest.  The old stone building remains much the same as it did in 1893 when it was built.

I am excited about watching more episodes of Murdoch Mysteries.  The 100th episode, due to be aired on October 27, will include a short scene with my friend Marlena Kaesler.  I am grateful to her for letting me know about her guest appearance.  Otherwise, I might never have discovered how interesting the show is.  So, tune in Mondays at 8 pm on CBC.