On November 22, 1963, America mourned the loss of their beloved President:  the one who promised to put a man on the moon by the end of the decade, the one who got the nation through the Cuban Missile Crisis, the one who stood in front of the Berlin Wall and shouted “Ich Bin Ein Berliner”, the one who set the Civil Rights Act in motion.

On that fateful day, when John F. Kennedy arrived in , Americans lined the motorcade route, spilling out onto the street, excitement in the air.  As Kennedy’s limousine made its way through the streets, Governor Connally turned to him and said:  “You can’t say that doesn’t love you, Mr. President”.  Within minutes, however, Kennedy was struck down by an assassin’s bullet in , caught on tape by dressmaker Abraham Zapruder. felt like they knew John F. Kennedy personally.  Americans had watched as Kennedy had taken the oath of office, steam coming out of his mouth on that frosty day in   And now they watched as the media covered the ensuing events:   Walter Cronkite took off his glasses and explained to America that their President had passed away; Dallas police apprehended Lee Harvey Oswald in a Dallas movie theatre; Lyndon Johnson raised his hand and took the oath of office on Air Force One, the slain president’s body in a coffin at the back of the plane; Jack Ruby shooting Lee Harvey Oswald two days later in the basement of the Dallas police station. 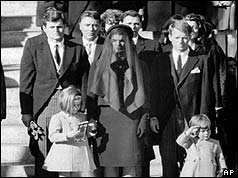 Americans watched as they buried their president:  John-John saluting his father’s coffin as it passed by; Jacqueline and Bobby walking behind the slain president’s coffin, only the clip clop of the horses breaking the silence; and a military gun salute piercing the sky as Kennedy was laid to rest at Arlington Cemetery, on a hill overlooking Washington D.C.

Fifty years later, Americans still remember that day.  The images are forever burned into their consciousness.  They will never forget that one brief shining moment – Camelot.