"I heard what sounded like 12 trains just roaring down the tracks, and it just wouldn't stop." (Nancy Rampy, Illinois resident)

Washington, Illinois is cleaning up from a deadly tornado that roared through the community, one of 16 tornadoes to hit the state on Sunday.  In its wake it left 8 dead and 120 injured.

The town of Washington, population 15,000, is 2 1/2 hours southwest of Chicago.  On Sunday, winds gusted up to 190 miles per hour.  A funnel cloud whipped through the community stripping trees of branches, reducing buildings to rubble and turning cars upside down.  An apartment complex of 200 units was flattened to the ground.  Mail for Washington residents was found scattered 80 miles from the town.  If it weren't for the bits of American flags clinging to the trees, one would have thought that it was a European war zone. 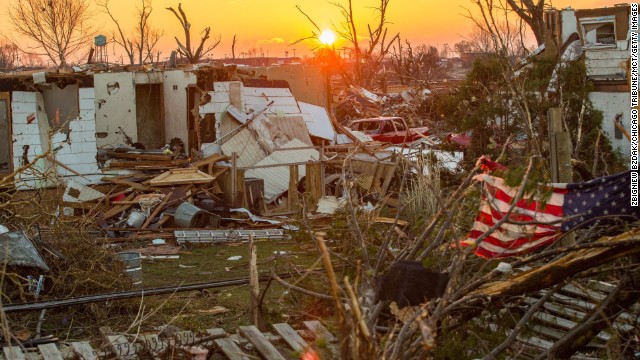 
Fortunately, the tornado warning system was used, giving residents time to seek shelter.  Many Illinois houses have basements unlike the southern states like Oklahoma where a tornado hit earlier this year.  Being a Sunday, some Washington residents were at church where they, too, headed to the basement.  In the end, four hundred homes were destroyed and 2000 people were displaced.