“A homeland is truly lost when one keeps silent about it, when no one remembers it anymore.” (Siegfried Lenz)

I watch footage of peacetime and am struck by the beauty of the city:  its turreted castle, its red brick churches, its Tudor style shops, its magnificent architecture, its cobblestone streets, its pretty parks, its meandering river, its gorgeous gardens, its charm.  I see the hustle and bustle as people walk up and down its cobblestone streets.  I can almost feel the vibe in the air.  It would be similar to the one my husband and I got when we visited last summer.  It is a city full of culture, full of character, full of history.  I can only imagine what it would have been like to visit the capital city when Rob’s Oma was young.  Now it is but a memory, bombed by the Allies, razed by the Soviets, officially part of .

Koenigsberg, population 375,000 in 1939, was a city of churches, castles, culture and character.  The Teutonic Knights arrived 700 years before.  The Koenigsberg castle was erected in the 16th and 18th centuries. They also built a wall around their heavily fortified fortress.  A city grew up around the castle, filled with massive brick churches, Tudor style shops, hotels and restaurants.  Horse and carriages travelled on the cobblestone streets, followed by streetcars and later automobiles.  The large boulevards, lined by trees, filled with pedestrians making their way from shop to shop.  East Prussian farmers made their way up and down the streets with their carts loaded with potatoes and vegetables, ready to sell them at the market.

Down by the wharf were fishing boats bringing in their catch for the day.  Rowboats floated up and down the under arched bridges.  Sailboats from ’s oldest sailing club founded in 1855, made their way down the river.  Bigger boats floated under the drawbridge which lifted for them to pass.  A canal was dug between Koenisberg and Pillau in 1901, increasing trade between and . 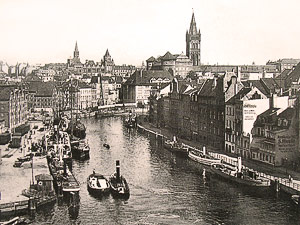 The , founded in 1544 by Duke Albert, was filled with students ready to listen to the lectures of philosopher Immanuel Kant.  Poles were among the first professors at the .  While Koenigsberg was overwhelming German, its population was also composed of Poles, Jews Lithuanians and Russians.  It was considered to be a pluralistic city.

Koenigsberg also boasted an , a and a , making the city an academic centre.

Koenigsberg was a publishing centre of Polish literature.  The first Polish translation of the New Testament took place there in 1551.  The first Lutheran catechism was printed there in 1547.  The Royal Library, which held 200,000 volumes on its shelves, opened in in 1534.  It was used often by the university students in town.  Its most famous librarian was the philosopher Immanuel Kant who worked there in the 1700’s. 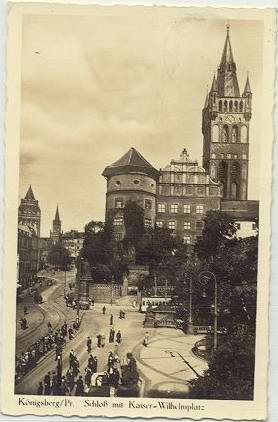 The railroad has always been a foundation for the city’s commerce.  It also served as a way to transport troops to the Russian border.  The Prussian Eastern Railway linked Koenigsberg with the city of in 1853 along with towns like , Thorn, Insterburg, Tilsit, Pillau and Eydtkuhnen.  In 1860, a railroad was completed from to , thereby increasing trade between and .  Koenigsberg got its first tram in 1895.

The Koenigsberg Zoo opened in 1896 under the direction of the Tiergarten Society.  At the time it had 893 specimens representing 262 species.  By 1911, East Prussian children could ride on their resident elephant named Jenny.  Adults were charged 50 pfennigs to enter and children were charged 20 pfennigs.
The Botanical Gardens, planted in 1811, flourished under Koenigsberg’s sunny skies.

Bakeries flourished on the city’s alleyways where specialties like marzipan were served, a Koenigsberg creation.  Butchers sold oshsenblut or ox blood.  Restaurants served Koenigsberger Pleck or bovine tripe soup as an appetizer.Wineries sold kopsklekelwein or currant wine and barenfang or a honey liqueur with a vodka base.    Koenigsberg, however, was known more for its breweries of which there were 224 in 1774. The capital of East Prussia was also a Protestant stronghold.  Its oldest church was St. Nicholas.  The , on an island in the middle of the , was also a magnificent building.  One of the only churches to survive the Allied bombing of 1944 was the Dom Cathedral.

The French Army captured Koenigsberg in 1814 and Emperor Napoleon paid a visit to the East Prussian capital.  Finally, in 1900 12 forts were constructed around the city of as a stronghold.  Russian troops arrived in the city again in 1914 at the opening of the First World War, but they were driven back by the .

Note:  To learn how Koenigsberg was destroyed, visit "Koenigsberg Burning" at http://alinefromlinda.blogspot.ca/2011/08/koenigsberg-burning.html.