Take a Turn on the Turnpike

Dubbed "Vanderbilt's Folly", the millionaire started building a railroad to cross Pennsylvania from east to west.  However, after spending 10 million dollars, Vanderbilt went bankrupt, leaving an unfinished railway and 26 workers dead.  Over 50 years later, the railroad bed would become the site of America's first superhighway, the Pennsylvania Turnpike.


A Pennsylvania superhighway had been discussed as early as 1910, only 7 years after Henry Ford opened his automobile factory.  However, it did not come to fruition until the 1930's.  Pennsylvania, one of the first states to establish a highway department, took the suggestion of Victor Lecoq and Willaim Sutherland to use the old railbed and its tunnels for a new turnpike.

A groundbreaking ceremony took place on October 27, 1938.  Concrete was first poured on August 31, 1939.  The workers' task was to build a 160 mile four-lane highway with seven two-lane tunnels, 11 interchanges and ten service plazas.  Work was tedious, low paying and dangerous, given the dynamiting of the tunnels.  Four workers died when a tunnel caved in.


Taking a page from the German autobahn, the highway architects designed ten service plazas, where gas and food were sold, in keeping with the local architecture (early Pennsylavania stone houses).  Toll booths were also built to collect money for the turnpike's upkeep.

Plans were made to have President Franklin D. Roosevelt to cut the ribbon at the highway's official opening.  However, on September 30, 1940, Roosevelt was a no show and the turnpike opened without pomp or circumstance.  Vehicles piled on to the highway, all wanting to take a drive through the beautiful Allegheny Mountains.

Automobiles line up to take a turn on the new turnpike courtesy explorepahistory.com.


While the president never did ride the turnpike on that first day, a military convoy made its way from east to west once the Second World War broke out.  With the men fighting abroad, it fell to the women to work the pumps along the turnpike's route.  Bridges over the highway had railroad-like signals reminding drivers of the 70 mile per hour speed limit. 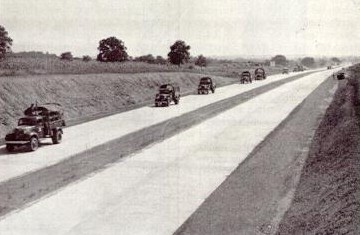 
In 1950, an eastern extension to Valley Forge was built.  In 1951, a western extension to Ohio was added.  By now, America had an intricate network of highways across many states.  In 1968, an alternate route was built along a 13 mile stretch of the turnpike, re-routing the traffic.  The abandonned section was soon overtaken by nature.


While the highway was inspired by Vanderbilt's mistake, it remains one of Pennsylvania's great successes.