Will the Real Butler Please Stand Up?

Washington Post journalist Wil Haygood was sent to North Carolina for a Barack Obama rally in 2007. After the rally, Mr. Haygood came upon three young college girls crying.  He asked if he could help and they said that their fathers disapproved of them backing a Black candidate for president, but "they can't stop us". That encounter convinced Wil that Barack Obama that the younger generation would vote in Barack Obama.  He set out to find a segregation-era Black employee from the White House.  That's when he heard about former White House butler Eugene Allen; he phoned 56 Eugene Allen's before he got the right one. The journalist paid Eugene and his wife Helene a visit in their Washington D.C. home.  Eugene's basement was filled with photographs of the eight presidents that he served:  travelling to Europe with Nixon, going to Camp David with Carter, visiting Gettysburg with Eisenhower, attending a state dinner at the White House with Reagan.  One momento he treasured was John F. Kennedy's necktie, given to him by Jacqueline Kennedy immediately after her husband's assassination.  Eugene certainly made his mark on the presidents he served.

Eugene Allen was born and raised on a plantation in Scottsville, Virginia in 1919, a time when lynchings were still far too common.  Eugene learned how to be a houseboy on the plantation, skills he put to good use when he later acquired a job at a Virginia resort.

In 1952, Eugene applied for a job at the White House, a time when White and Colored Signs were still hanging above fountains, washrooms and lunch counters.  The unassuming, gentle Eugene took pride in his job as a pantry worker:  bit by bit, he learned the ropes in the White House kitchen.  And bit by bit, he moved his way up the ladder.  Eventually, he landed the job of head butler.  In 34 years, he never missed a day of work. 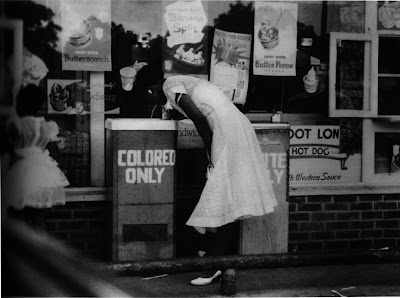 While Blacks were common in the White House kitchen, they were not common down the street at Capitol Hill.  Electing a Black president, according to Eugene, was a "dream that you couldn't even dream".  And yet, in his old age, Eugene found himself watching the presidential race between McCain and Obama.  Mr. and Mrs. Allen relished the idea of voting for a Black candidate.  However, on the eve of the election, Mrs. Allen passed away.  The grieving Eugene still voted a few days after his wife's funeral and watched his candidate's acceptance speech on November 7, 2007.

The following January, despite the frigid conditions, the almost 88-year-old Eugene Allen made his way through the crowds to his seat where he listened to Barack Obama sworn in as the 44th President of the United States.  Eugene passed away a year later, his dream realized.