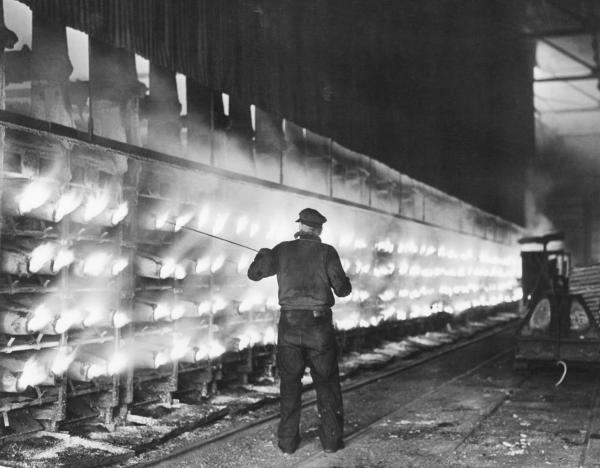 
Donora, Pennsylvania lies in the Monongahela River valley, home to 14,000 in the middle of the 20th Century.  A smog descended on the town on this day in 1948, lingering for five days.  When the smog lifted, at least 6000 people were seriously ill and 20 people were dead.

Donora was home to the U.S. Steel plant and the Donora Zinc Works, both of which pumped a significant amount of pollution into the air back in the 1940's.  Coal burning trains and river boats added more fumes to the noxious cloud.  When a heavy fog blanketed the town, it started to seep into people's homes.  Residents started coming down with illnesses, particularly those with lung or heart disease; hundreds ended up in the hospital.  Dr. Rongaus, who treated 40 of the ill residents, predicted that 1000 people would have died if the smog had lasted another day.

Fortunately, however, the smog lifted on Halloween, not a moment too soon.  The Pennsylvania State Bureau of Industrial Hygiene ran tests on the Donora air and found excessive amounts of sulfur dioxide, soluble sulphants and fluoride.  However, U.S. Steel did not want to take any responsibility for the pollution even going so far as trying to cover up the problem, along with the U.S. Public Health Services.  P.H.S. records mysteriously disappeared and U.S. Steel blocked public access to their records.

Even so, U.S. Steel was forced to pay an undisclosed amount to the surviving victims of the Donora smog. The United States government passed the Clean Air Act in 1955, partly in response to the Donora "Cloud of Death".


For a similar post, visit "A Proper Pea Souper" at http://alinefromlinda.blogspot.ca/2011/12/proper-pea-souper.html.