What a gorgeous day to take a drive to Cambridge with my daughter Jacqueline and five of her girlfriends for a cross country meet.  While the day dawned cloudy, the sun soon appeared as we headed north.  The six girls were bursting with energy, hoping that I would engage the school bus, holding the rest of the kids, in a duel.  The girls busily chatted away while I enjoyed the scenery of reds, golds and greens.

When we arrived at Churchill Park, the girls piled out, their backpacks in hand, their blue BCS jerseys on their backs.  The girls laid their backpacks under a cluster of trees and started warming up with a slow jog followed by some stretches.  I got out the school camera and started snapping photos.  I felt like a real photographer with my telephoto lens, quite different from my inexpensive digital camera.

The Junior Girls were up first to race.  Jacqueline and her girlfriends lined up at the starting line.  "On your mark, get set..." and a whistle blew.  There was a flurry of arms and legs and ponytails as the girls sprinted across the field.  Soon they settled into their own stride.  They rounded a bend and made their way up a steep hill.  After a couple of minutes, they made their way down the other side of the hill, some slowing down, others still at full speed ahead.  At the finish line, they took a second trip around the course.

I stood at the finish line, camera ready.  One by one, I snapped the girls coming through the chute to the finish line.  BCS's first runner through was Lorelei who placed eighth.  Others soon followed.  Some finished without a sound; others were huffing and puffing; and some even collapsed at the finish line.  When it was Jacqueline's turn to finish, she ran right behind her friend, Abby.  She was not huffing and puffing.  She had no tears.  In fact, she had a smile on her face!  Out of 119 girls, she placed 74 -- pretty good for her first meet and if you consider that her mom used to be at the end of the pack in elementary school.  Maybe she takes after her Uncle Bill, who used to be first when he ran the track at Westerveld College.

The girls retreated to their spot under a clump of trees to eat their lunches while the junior boys took their place at the starting line.  Our Physed teacher's son came in second!  The senior girls ran next followed by the senior boys.  I snapped more photos as the boys came into the finish line, their faces red, their bodies sweaty.  Another BCS boy placed second.

At the end, all six Christian schools gathered in the middle of the field to watch the medals be distributed.  BCS came in a respectable fourth.  But more importantly, they got some good exercise and shared some good camaraderie as they cheered on their teammates.  The leader said a prayer and the crowd slowly dispersed.  I tucked the school camera into its case and we headed home to Brantford.  The blue jerseys will get tucked away too...until next year. 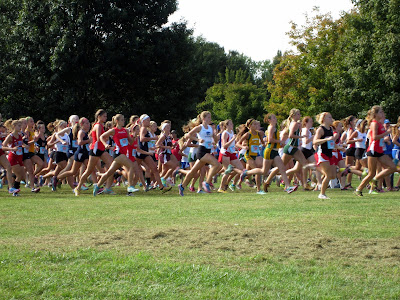