"How do you feel when your husband is about to be blasted off in space?" -- "Proud, thrilled and happy."  First used by astronaut wife Rene Carpenter, this answer became the standard one for the astrowives.  While the women were indeed proud, thrilled and happy, they were also nervous, anxious and fearful.  Many adjectives are needed to describe the astrowives' range of emotions.  But to the world, they would paste on a smile; they would not want to jeopardize their husbands' careers. 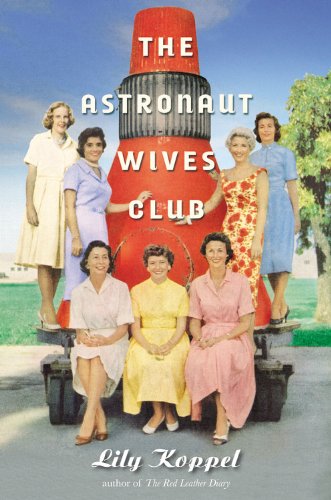 Wearing pastel dresses and high heels, sporting conservative hairdos, the seven women stood around a space capsule and smiled for the camera.  It was the first photo shoot of the seven astronaut wives, the spouses of the Mercury Seven astronauts.  "With pastel frocks, plastered on smiles, cocktails and plates of devilled eggs" the seven women were a tight knit group who conversed often with their fellow astronaut wives.  One perk of the job was sharing tea with First Lady Jacqueline Kennedy after their husbands returned from space. The astrowives were expected to "man" the home front while their husbands trained at Cape Canaveral (later Cape Kennedy).  Issues that normal couples would discuss together were kept quiet among the astronaut wives.  Jim Lovell's wife, Marilyn, decided not to tell her husband when three of their children had their tonsils removed.  Much later, Jim found their hospital ID bracelets in a drawer and asked Marilyn why he hadn't been informed.  She explained that he had so much on his plate, she wasn't about to add more. Their husbands were addicted to fast cars, fast planes, and now, fast rockets.  The second astronaut in space, Alan Shepard, was also addicted to fast women.  The first astronaut in space, John Glenn, once had to persuade a newspaper reporter from not publishing a story about one of his fellow astronaut's indiscretions.
The Gemini Nine added more to the mix.  By now the astronauts and their wives were living in Houston, Texas where NASA was based.  Pat White, a delicate lady, had to sit on pins and needles as her husband Ed performed the first space walk.  Susan Borman knew that the tighter the space marriage, the better the flight position.  Due to the pressure of trying to keep up the image of a perfect marriage, she turned to alcohol and became an alcoholic.  Fortunately for Mrs. Borman, Mr. Borman was a kind soul.  He supported her through rehab and they came out the other side a stronger couple.

The Apollo missions to the moon brought even more wives into the mix.  Former actress Joan Aldrin had to share the spotlight with her astronaut husband Buzz, nicknamed by his baby sister who could not pronounce the word brother and called him "buzzer" instead.  For the second man to walk on the moon, he could never recapture that excitement again.  Becoming depressed and turning to alcohol, his marriage went up in flames.

Barbara Cernan pointed out that "If you think going to the moon is hard, try staying home."  It was during those long hours alone at home, that the wives turned to each other.  Their Houston neighbourhood became known as "Togethersville" due to the amount of time the space wives spent together.  They would babysit each others' children.  They would hold each others' hand during a launch, or worse, after a training accident or crash.  They would even campaign for a respective spouse as was the case of Rene Carpenter, who campaigned for John Glenn as a senator since his wife had a terrible stutter.  Lasting friendships were created in "Togethersville".

However, many marriages would not last.  The first space divorce happened in 1969 and others followed. Out of 30 space unions, only seven survived.  The Glenn's, wed in 1947, are still married today.  The Lovell's, high school sweethearts, were also one of the lucky couples.  The Borman's, too, ran the distance. While the space race was an exciting time, they were content to live out their golden years together.

Note:  For more information read The Astronaut Wives Club by Lilly Koppel.
Posted by Linda at 11:50