The Algonquin Indian term for it was "sinzibuckwud" meaning "drawn from wood".  The French term was "sirop d'erable".  The English, of course, was maple syrup.  Maple syrup was made by the Natives in Canada by drawing sap from red, black and sugar maples.  They used their tomahawks to carve a V-shape in the tree's trunk, and then poked a reed into the trunk which attached to a bucket made of birch bark.  Then the sap had to be boiled in a large clay pot before it turned into syrup.

The Natives in turn showed the early French settlers in Canada how to make the sticky treat.  In the 1800's, maple syrup was as common as salt on the average Quebecois' dinner table.  Many Quebecois recipes call for maple syrup.  Visiting a "cabane a sucre" was a regular occurrence for Quebecois children including one girl who recalled her experience in a book titled "The Sugaring Off Party" (Jonathon London & Gilles Pelletier). In the northern United States like Vermont and New York, maple syrup was used in the 1800's as a substitute to molasses or cane sugar, both made by the Southern slaves.  Abolitionists also used maple syrup to take a stand against slavery.

The clay pots used to boil maple sap were replaced by iron kettles during the time of the pioneers.  The American Civil War ushered in the use of tin cups which led to the use of flat sheet metal pans to boil the sap.  While the metal pans were a better shape than the kettles, the process remained a slow one.  In fact, 20 to 50 litres of sap only produced 1 litre of syrup. 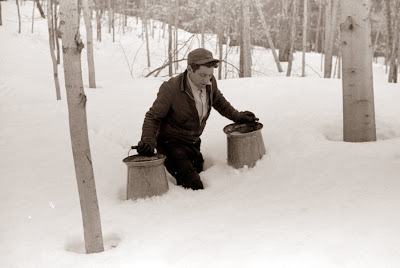 The Second World War brought rationing in Europe and even North America.  Sugar was in short supply so many turned to maple syrup.  Recipe books were written at the time calling for syrup rather than sugar.

In the 1970's, a tubing system was designed whereby the maple sap could run directly from the tree trunk to the evaporator house, thereby eliminating the need to carry buckets back and forth.

Today, Quebec remains the top producer of maple syrup in Canada; in fact, it provides three-quarters of the world's supply.  In order to be labelled "maple syrup" the product must contain at least 66% maple syrup.  Table syrup, on the other hand, that is available for a lot less money, is not maple syrup by rather corn syrup.