Peacefully they walked to the train,
Sick and tired of the daily battle,
Doggedly gaze into the brutal eyes did
The cattle.
The handsome officers gloated
That they are bothered by nothing,
That with a dull step the hordes are marching,
And only for diversion
The whips cracked,
Slashing their faces!
The throng in silence sank to the ground,
Before it dissolved in sobs in cattle cars,
Their blood and tears,
Trickling into the sandy ground,
And the Herrenvolk
Carelessly tossed
little boxes
on the corpses--
"Warum sind Juno rund."
Then, on that day,
When on the Stimmung lulled city
They pounced like hyenas in dawn's early mist,
Then the cattle awakened
And
Bared its teeth . . .
On Miťa Street the first shot was heard,
A gendarme staggered at the gate,
He stared surprised--stood still for a moment,
Patted his shattered arm--
Didn't believe it.
Something is not right,
Everything went so smooth and straight,
As a favor, because of special influence,
He was turned back from the Eastern Front
(Had a few satisfying days),
Rested in Warsaw,
Driving this cattle in an Aktion,
And cleaning up this pigsty,
But here,
On Mi~la street, BLOOD
The gendarme pulled back from the gate
And swore: I'm really bleeding,
But here Braunings were barking
On Niska,
On Dzika,
On Pawia.
On the crooked stairway,
Where an old mother
Was dragged by the hair,
Lies SS-man Handtke,
Strangely puffed up,
As if he couldn't digest death,
As if he choked on the revolt.
He belched, spitting up blood
Into the little box –“Juno sind rund,
Rund, rund.
Golden epaulets crush the dust,
Everything spins around,
The sky-blue uniform lies
On the spittle-covered stairs
Of the Jewish Pawia Street
And doesn't know
That at Schultz and Toebbens
Bullets whirl in a joyous song,
REVOLT OF THE MEAT,
REVOLT OF THE MEAT,
REVOLT OF THE MEAT!
Meat spits grenades out the windows.
Meat belches out scarlet flames
And clings to the edges of life!
Hey! What joy to shoot in the eye!
THIS IS THE FRONT, MY LORDS!
THE FRONT - GENTLEMEN SHIRKERS
HIER
TRINK MAN MEHR BIER,
HEIR
HIER HAT MAN MEHR KEIN MUT,
BLUT
BLUT
BLUT!
Peal off the fair, smooth, leather gloves,
Put your whips aside and helmets on.
Tomorrow issue a press release:
"Penetrated the lines of Toebbens' block.
Revolt of the meat,
REVOLT OF THE MEAT,
SONG OF THE MEAT!

Hear, O German God,
How the Jews, in the "wild" houses pray,
Clenching in the fist a stick, a stone.
We beg you, O God, for a bloody battle,
We implore you for a violent death,
Let our eyes not see, before we expire,
The stretch of the train tracks,
But let the precise aim of our hand, O Lord,
Stain their livid uniforms with blood,
Let us see, before the mute groan
Shreds our throats,
Our simple human fear in their
Haughty hands, in their whip-wielding paws.
From Niska, Mi-la, and Muranowska Streets,
Like scarlet flowers of blood,
Sprout the flames of our gunbarrels.
This is our Spring! Our Counterattack!
The intoxication of our battle!
These are our partisan forests:
The alleys of Dzika and Ostrowska Streets.
"Block" numbers quiver on breasts,
Medals of the Jewish war.
The cry of six letters flashes in red,
Like a battering ram bellows the word: REVOLT
.................................................
.................................................
And on the street, the bloodied.
Trampled packet:
JUNO SIND RUND.


The Warsaw Ghetto Uprising started in early 1943, but the bulk of the fighting took place between April 19 and May 16, 1943.  Jews had been rounded up by the Nazis in Poland's large cities and placed in ghettoes of which Warsaw's was the largest at 300,000 to 400,000.  Thousands had already died of disease due to malnutrition and starvation. 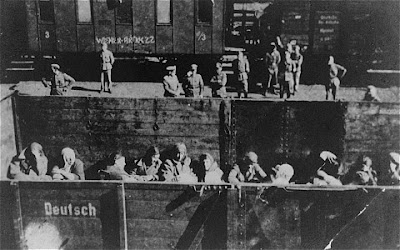 Photo of Jews being deported in cattle cars out of Warsaw courtesy www.ushmm.org.


At first, when the Nazis started to deport the Jews, they did not formally protest, thinking they were going to labour camps.  However, once they discovered that the deportation trains were taking them to extermination camps like Treblinka (250,000 to 300,000 perished) they fought back.  The Warsaw Ghetto Uprising was the largest single revolt by Jews during the Holocaust. 
The Polish poet Wladyslaw Szlengel wrote "Kontratak" in response to the Jewish armed resistance against the Nazis.  During the Spring of 1943, when the uprising was at its height, Szlengel's poem became the ghetto's "anthem".  Sadly, he died during the uprising.  His poem was found later hidden between the leaves of a table in the ghetto. 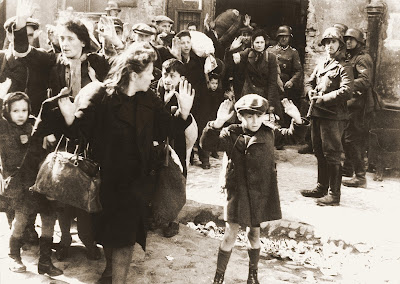