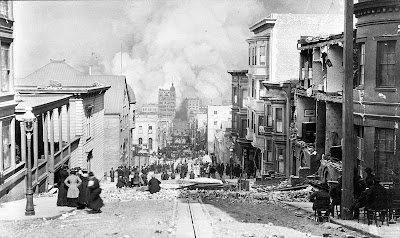 
On the morning of April 18, 1906, San Francisco residents felt the earth shake for a matter of seconds,  but it felt like an eternity.  Shaking was felt as far north as Oregon, as far south as Los Angeles and as far east as central Nevada as the Richter Scale peaked at 8.25.  When the earth stood still,  490 city blocks had been destroyed, 30 fires had been set and 80% of the city had been obliterated.  The Salinas river outlet was permanently diverted six miles to the south.  Up to 300,000 San Franciscans were rendered homeless out of a total 410,000 residents aand the death toll would reach 3000. 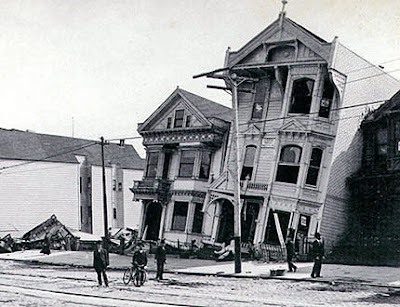 
Makeshift tents were set up for the displaced persons; these refugee camps would remain in operation a full two years after the quake.  The United States Army was called in to build temporary housing camps, helping immensely.  However, members of the 22nd Infantry Regiment took the chance to loot during the massive fire.  Although many stayed, many also fled the flattened city in droves, causing trade and industry to leave as well.  Once the biggest city on the West Coast, San Francisco would lose this title to Los Angeles.