The Power of Positive Thinking

Norman Vincent Peale arrived at the Marble Collegiate Church in New York City in 1932 with a congregation of 600.  By the time he left in 1984, his flock had grown to 5,000.  What was his secret to success?  It was the power of positive thinking.

In 1952, Dr. Peale wrote a book called The Power of Positive Thinking which sold millions of copies and was translated into 41 languages.  Here is an excerpt from the bestseller:  “The way to happiness: Keep your heart free from hate, your mind from worry. Live simply, expect little, give much. Scatter sunshine, forget self, think of others. Try this for a week and you will be surprised.”

As a child growing up in Ohio, Norman had a terrible inferiority complex and developed the habit of positive thinking to combat it.  He applied Christianity to everyday problems, explaining that positive thinking was "just another term for faith".  His sermons were well received not only helping to fill the pews at the Marble Collegiate but to inspire those at home as well:  750,000 people received his sermons each month by mail.  He also had a weekly radio broadcast called "The Art of Living" with a wide listening audience.  Furthermore, Dr. Peale and his wife started Guideposts magazine in 1945 which has a readership of 4.5 million today.

Dr. Peale's idea is simple, but it works:  think positive and you will achieve positive results.  Or as the Bible says:  "Delight yourself in the Lord and He will give you the desires of your heart." (Psalm 37:4) 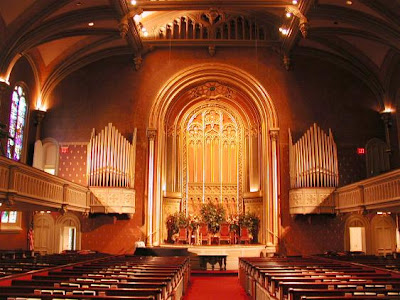