It weighed 1200 pounds, cost $825, ran 40 miles an hour, and came in one colour -- black.  It was produced in 19 different countries and 15 million models were sold.  Some historians say that Henry Ford's Model T automobile did more to change the American landscape than any other machine.  On this day in 1908, the first Model T was built at the Piquette Avenue Plant in Detroit, Michigan.  Only 200,000 cars existed at the time, reserved for the rich since they were so expensive.  But Henry Ford announced "I will build a car for the multitude" and that is exactly what he did in the years 1908 to 1927.  Although the Model T was not easy to start and more than a few people were known to get broken arms while trying to turn the crank, it was user friendly enough that they caught on eventually.

Already cheaper than other automobiles when it first came out, the Model T's price dropped considerably with Ford's invention of the assembly line in 1914 after which he could produce cars at a much faster rate.  The Model T had interchangeable parts which made repairs easier and cheaper.  Furthermore, Ford was the first American Company to pay its workers $5 a day, making the vehicles even more within their reach.  By 1914, the car affectionately called the Tin Lizzie, dropped to $260 and 4 out of 5 Americans owned a car.  For the first time, workers were able to commute to work and America saw the growth of the suburbs, highways and biways.

Rural America changed bit by bit to urban America.  Farmers converted the Model T's into tractors; firefighters used them as fire engines; race car drivers used them as speedsters; and store owners used them as delivery trucks; teenagers used them to take their girlfriends on dates.  As Ford claimed, they were "reliable, affordable and versatile".  It's been over 100 years since the first Model T was built and yet people still remember them with affection.  Some sit in museums, some sit in collector's garages and some sit abandonned in farmers' fields.  The Tin Lizzie made its mark on America and on the world. 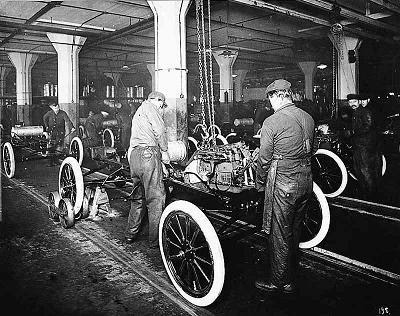