I raced down the highway to my destination with my passenger, Mr. Porkers, sitting proudly in his pink fur, his little black eyes looking straight ahead.  I had an important task to perform:  getting Mr. Porkers to his meeting by 9:30 am.  I took the corners carefully so Mr. Porkers would not fall off the seat.  He was a cooperative passenger, making not a sound as we approached our destination.

Pulling into the parking lot, I eased the van into a spot close to the front door so Mr. Porkers would not have to far to go.  Stepping out of the van, I took my purse in one hand, and Mr. Porkers in the other.  We opened the door and walked down the hallway to the gym.  The assembly was already in progress and all of the students listened attentively as the pastor spoke.  The students sang three praise choruses and the assembly came to a close.

A little girl dressed in turquoise blue cords and a striped sweater with a hood turned around and spotted me and Mr. Porkers, flashing us a smile.  She stood up and I walked over to her, handing her Mr. Porkers:  it was showtime.  As she followed her teacher back to her classroom she tucked Mr. Porkers under her sweater so none of her classmates could see him.  They would have to guess who he was.  Then he would take his place beside the other guests for the day in Mrs. Silver's classroom.

For now, my job is complete.  But I will never forget the day I drove Mr. Porkers to his first appointment.  It was my pleasure! 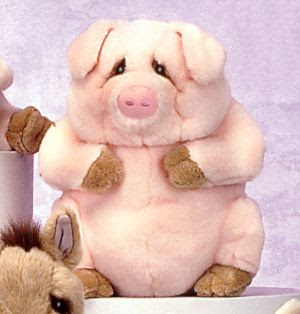