The Sweetest Place on Earth

Back in the 1980's, my in-laws took a trip through New York State and Pennsylvania -- their destination was the town of Hershey, the sweetest place on earth.  As they approached the outskirts of the town, the chocolate aroma filled the country air, heightening their senses .  After a tour of the town, they returned to Ontario loaded down with a giant chocolate bar wrapped in that signature dark brown wrapper with the letters HERSHEY emblazoned in silver on the top.

Born in Derry Church, Pennsylvania in 1887, Milton Hershey was the son of Mennonite parents and had one sister who died of scarlet fever when he was nine years old.  Milton apprenticed as a printer when he was young, but hated the job so much that he deliberately dropped his hat into a vat of ink.  He switched to candy-making, apprenticing with a Lancaster candymaker for four years, after which he opened his own candy-making business in Philadelphia but failed due to the lack of customers.  His father announced that he was going out west to search for gold and Milton accompanied him, working for a candy maker in Colorado who showed him how to make caramels.  Upon returning to Pennsylvania, the young Hershey set up the Lancaster Caramel Company which was a resounding success.  Milton attended the World's Columbian Exposition in 1893 and was fascinated by the machinery on display used to make German chocolate.  He sold the Lancaster Caramel Company, purchased 1200 acres of land near Lancaster and built a plant to manufacture milk chocolate, at the time a Swiss delicacy.  His plant, sitting in the middle of dairy farmland which gave him an unlimited supply of fresh milk, opened in 1905 and was the largest in the world.  Mr. Hershey also built a town for his employees which, rather than offering cookie-cutter rowhouses, boasted one and two-story brick homes, manicured lawns, tree-lined streets and a chocolate aroma wafting through the air.

Milton married Catherine Sweeney, a woman who was never able to have children.  Mr. Hershey, therefore, devoted his attention to other children by opening the Hershey Industrial School to aid in their education.  The Hershey's were wealthy enough to buy tickets to the maiden voyage of the Titanic in 1912, but Mrs. Hershey ended up cancelling their plans due to an illness; they reserved passage on another ship, the Amerika, instead.  Mrs. Hershey passed away a few years later, but Mr. Hershey lived until the ripe old age of 88.  His company continued to make fine chocolate, producing over 3 billion Ration D and Tropical Chocolate Bars designed, to resist the heat, that were served to World War II soldiers and sailors all over the globe.   The American Post Office issued a stamp honouring Milton Hershey valued at 32 cents.

Hershey, Pennsylvania now has 12,000 residents.  If you want to find the Hershey Plant, follow the Hershey Kiss streetlights to the corner of Chocolate Avenue and Cocoa Avenue.  Or you can just follow the chocolate aroma to get to your destination.  It's the sweetest place on earth! 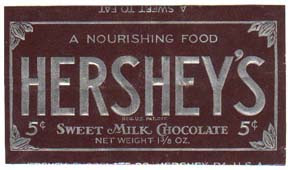