I am the only one of my siblings that cannot draw.  My students laugh when I draw stick figures on the blackboard.  And yet my son Thomas is very artistic.  He must have gotten his talent from his birthparents, both of whom are very artistic.  About a year and a half ago I borrowed a book from the library titled "Create Your Own Comic Strips from Start to Finish" by Art Roche.  Once Thomas read it, he was hooked.  He started drawing comics left and right under the heading LOLZ (Laugh Out Loud's)  He even featured me in one comic he wrote for Mother's Day.  Rob made the mistake of complaining about the muffins I baked.  Thomas response was:  "Oh no you didn't!"  Rob was spared within an inch of his life and thought twice about complaining about my baking the next time.

The other day, Thomas borrowed the Art Roche book again from the library.  This time he wrote a comic called "Halloweiner" featuring his friend Riley as a hunchback and an unhappy weiner that is covered in mustard but its luck turns when it meets up with the ketchup bottle.  What do you expect from someone who douses everything in ketchup?

Thomas has drawn a total of 15 comics.  It's nice to see that he using his God-given talent to create.  It's also nice to see that he's using his sense of humour.  He certainly makes his sister Jacqueline laugh so I'm sure he'll make his readers laugh, too.  Thomas is blessed to have such a creative mind.  Maybe one day we'll be reading LOLZ next to Garfield. 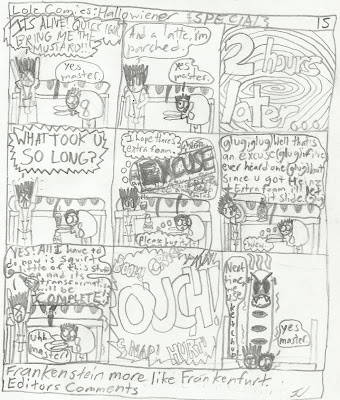