In the Palm of His Hand

What do Isaac Newton, Winston Churchill, Anna Pavlova and my nephew Cody all have in common?  They were all born several weeks premature and yet you wouldn't know it.  Isaac Newton was so tiny at birth that he fit into a quart mug;  Anna Pavlova arrived at 7 months gestation as did Winston Churchill.  My nephew arrived 3 months early and weighed a mere 2.2 pounds at birth.  You could have held him in the palm of your hand.

At first Cody stayed in the hospital until he reached the weight of a full term baby.  Then, he went home but made regular trips back to the hospital for check ups.  I remember the doctor suggesting that he get a swing to help with his balance.  Bit by bit, Cody started to catch up.  Although it took him a little bit longer to walk, once he did, he was running in no time.  Although he was always thin, his look was always healthy; even when he got sick, he bounced back quickly.

Cody was always a quiet boy.  As my Mom said, he would sit back and observe what others were doing.  You might have thought that he wasn't paying attention; but then he would do what someone else had done flawlessly.  I remember when my son Thomas, who was born the same year as his cousin, would sit in his playpen.  Cody didn't like his playpen, but he wouldn't hesitate to climb into Thomas' playpen to play with his cousin.  At one time he had a tutor for Math; and yet he just completed Grade 7 and received an "A" on every Math test.  One time, he was doing something very quietly in his bedroom and his Mom went to see what he was up to.  She discovered his new lamp hanging from the ceiling and Cody, being the son of an electrician, explained that he had just completed "a small electrical job".  Yes, Cody is observant and he doesn't miss a beat.

We enjoyed a 3-night visit with my nephew this week.  On July 14, we dined on juicy porkchops and cottage cheese pasta.  Then we sang "Happy Birthday" and my nephew blew out candle number 13 on a devil's food cake.  Later, Cody weighed himself; the scale registered 96.2 pounds.  While we can't hold him in the palm of our hand anymore, God will always hold him in the palm of His hand.  Happy Birthday, Cody! 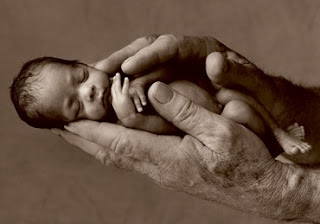