As we made our way along Downie Street to the Avon Theatre in Stratford, the relentless sun beat down on us and a warm wind blew the bottom of my dress up.  A little girl played the violin, the theme from Ken Burns' American Civil War series, her violin case open with coins and a couple of bills sitting in it.  My heart went out to her, especially since she looked no more than 9 years old, and I put some money in the case.  Into the air conditioned Avon, a former movie theatre, we went and I rested my weary feet, sore from the heels I'd been wearing all day.

Rob has had the "Jesus Christ Superstar" soundtrack for many years.  We did not intend on seeing the musical, however, because it was my turn to choose a play and I picked John Steinbeck's "The Grapes of Wrath".  But on the way home from London a week ago Rob heard a rave review of "Jesus Christ Superstar" on the radio.  Then he downloaded some of the music and he was blown away.  "It's even better than the original," he claimed.

Rob and I made our way up to the second floor and then climbed the stairs to the top of the balcony.  My six-foot-four-inch husband attempted to squeeze into a seat beside a young man, but it wasn't working.  I offered to trade spots with him so that he would have at least a little bit of leg room.  We settled into our seats, shoulder to shoulder, in a sold out theatre, something rare for the present day Festival.  The air was heavy with heat and anticipation.

The announcer spoke, reminding us of no flash photography or cell phone use during the performance.  The curtain rose and we heard the succinct riffs of the electric guitar.  Within seconds, Rob was hooked.  Judas Iscariot, clothed in a blue outfit, sang 'Heaven on TheirMinds" in a clear, powerful voice.  Later, Mary Magdalene, garbed in a gold dress, sang "I Don't Know How to Love Him".  When praying in the garden shortly before Judas betrays him to the Roman centurions, Paul Nolan who plays Jesus belts out the song "Gethsemane".  The acoustics were excellent.


Rob wondered if the play would indeed have a Christian message.  I felt that it was portrayed in a Christian light for several reasons.  Firstly, those who mocked Jesus were definitely portrayed in a negative light.  Secondly, Jesus drew a crowd wherever he went; people wanted to be in His presence.  Thirdly, in one scene, He is healing several sick individuals.  Above all, I remarked to Rob that the most triumphant song by far in the musical was "Jesus Christ Superstar".

As the production came to a close, every audience member rose to his feet and joined in the heartfelt applause.  Rob was smiling from ear to ear.  "Now that's how to make a hit", he said.  "You take a good play that's already been done, and you make it even better.  No tricks.  Not gimmicks.  Just stick to the script."  The winning formula has produced a musical that is on its way to San Diego after the Stratford Festival season comes to a close.  There is even talk of taking the production to Broadway.  Andrew Lloyd Webber, the creator of "Jesus Christ Superstar", slipped into the Avon Theatre one night to hear a performance and even he gave it high praise.

As we filed out of the theatre, our bodies were warm as well as our hearts.  We retraced our steps down Downie Street and looked up at the night sky dotted with stars.  Our Redeemer lives! 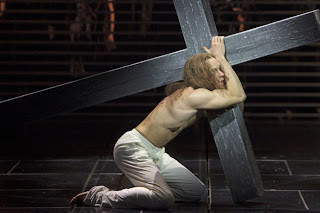