A caravan of 18 Wehrmacht trucks left the Catherine Palace and wound its way through the countryside of Russia to East Prussia.  Inside the trucks were 26 crates and inside the crates was one of Europe's greatest art treasures, the Amber Room.  Commissioned by Frederick the Great of Prussia to be given to Peter the Great of Russia in 1818 as a gift, the Amber Room was an entire chamber paneled in amber, sometimes called "the eighth wonder of the world".  Amber was worth ten times the value of gold at the time and floated in abundance on the shores of the Baltic Sea.  The Prussians had delivered the Amber Room to Leningrad in 18 wagon carts where it had been put on display in the Catherine Palace for the commoners to admire.

There it had sat for over two centuries.  However, when the Nazis invaded Leningrad in September of 1941, they captured the Catherine Palace (Catherine Palais) and occupied it as they did the entire city (the Siege of Leningrad).  Predicting their imminent arrival, the Russians had packed up many of their art treasures, but they had not had time to dismantle the Amber Room.  Hastily they had wallpapered over it to disguise the panels.

Now it was late 1941 and the Wehrmacht was at the gates of Leningrad.  They stormed the palace, ripped off the wallpaper and discovered the Amber Room underneath.  It took the German Army 36 hours to pack up the panels into the crates.  Six months later, the Amber Room arrived in Koenigsberg, East Prussia and was put on display in the museum of Koenigsberg Castle, the original location of its construction.  The treasure was on display to visitors to the city for two years.

In August of 1944 the Allies bombed Koenigsberg Castle.  Soon after, the Amber Room disappeared.  Eyewitnesses said that they spotted the amber panels at the Koenigsberg train station.  Rumours spread that it was on the ill-fated ship the Wilhelm Gustloff which was torpedoed and sunk by the Russians in the Baltic Sea.  Others claimed that the chamber was hidden in an underground cave.

In March of 1946, Anatoly Kuchumov headed to Koenigsberg to search for the Amber Room.  He discovered some of the 25,000 German refugees hidden in the cellars of the burnt out Koenigsberg homes.  In the rubble of the former Koenigsberg Castle, he found small traces of the Amber Room.  He also found some partially burnt letters explaining the plan to evacuate the Amber Room to a castle in Saxony (West Germany).  Kuchumov discovered three stone mosaic pictures that once decorated the amber panels, although there had originally been four; this gave him hope that the Amber Room had been safely evacuated.  But where?  Evacuating the panels by road would have been virtually impossible given the condition of the roads at the time and the size of the load.  Likely the evacuation was done by train or by boat.  The last train left Koenigsberg on January 22, 1945, the precise time when the amber panels disappeared.

Interestingly enough, a replica of the Amber Room, started in 1999 and completed in 2004, is now on display in Russia and has been viewed by many diplomats including Russia's former President Putin and England's former Prime Minister Tony Blair.  How strange that a regime as evil as the Nazis would have valued an artistic treasure as beautiful as the Amber Room.  Given that they were known for looting European art during the war, though, it should not be a surprise.  The mystery continues. 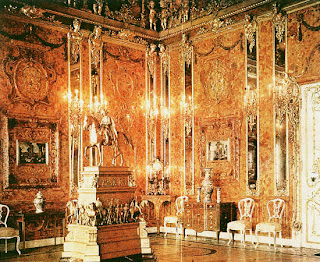