Guess Who's Coming to Dinner?

I'll give you a hint.  If you read my blog titled "The Berenstain Bears and A Leap of Faith" (June 1), you might figure out who's coming to dinner today.  They are a nice young couple named Lance and Nicole, the same couple we took out for dinner twelve and a half years ago.

It was an unseasonably warm December day.  A thunderstorm hit as we prepared for the dinner and I struggled nervously to put on my contacts in the dark.  Our nerves disappeared, however, once we reached the restaurant.  Lance was dressed in a white and navy blue sports shirt and jeans.  Nicole was dressed in a pretty yellow embroidered top and pants. We sat in a booth together at Moose Winooski's and the waitor took our picture.  Rob ordered a party size platter of nachos that evening.  I ordered chicken fingers and fries.  But we weren't focussing on the food that night.  We talked up a storm as if we had known each other for years; and yet we had only met two days before.  I can still show you the booth where we dined.  The waitor took our picture, a keepsake from the magical evening.  As Nicole stood up to leave, we could see her round belly.  She was the vision of good health; her beautiful face glowed and her wavy hair shone.  As we said our goodbyes, we knew it would not be long before we met again.

Two days later the phone rang.  Lance announced that Nicole had just delivered a bouncing baby boy of 9 pounds and 20 1/2 inches long.  We jumped in the car and raced to the hospital to see him.  Nicole gave me her precious bundle and I held him like one might hold a fine piece of china.  Lance had already taken lots of photos of the new baby whom we named Thomas Lance:  a shot of him in a hand-knit yellow sweater with a hood that made him look like a little George Washington; a shot of him with a baby book, Pat the Bunny; a shot of him propped up with a soft white Teddy bear and a bouquet of flowers -- all gifts his birth relatives had given him.  There was also a picture of Lance's feet held up to Thomas' feet.  Both had very long toes; they were definitely related.  I fed Thomas his bottle and we chatted for two hours.  Then it was time to go.

We brought Thomas home 13 days later.  What a joy it was to see him grow!  And for the first six months we got a visit from Lance and Nicole.  Always a little nervous at first, once we saw the couple, our nervousness disappeared.  They got to watch Thomas grow like a weed.  We wondered how the visits would pan out.  Afterall, there was no manual to follow.  But God guided us every step of the way.  People wondered if Thomas' birthparents would be interfering; I found that the average Joe on the street had more unsolicited parenting advice than they ever did.  Lance and Nicole gave us their child; giving them these visits was the least we could do.

Now Thomas anxiously awaits his birthparents' bi-annual visit.  At Christmas time, they come loaded down with gifts.  They must spend their entire pay cheque on presents.  Thomas rips them open, smiling ear to ear.  Now Jacqueline gets presents as well from them.  A couple of years ago she asked me who her birthparents were; when I said that Mommy and Daddy were, she looked disappointed.  So I suggested we make Lance and Nicole her honourary birthparents.  And she agreed.  She is in there like a dirty old shirt as they watch movies and play video games together.

Today was our summer visit.  Thomas is shoulder to shoulder with Nicole now.  It won't be that many years before he reaches Lance's height.  We always play a soccer game in the backyard.  Usually it's birth family against birth family.  Usually, Lance, Nicole and Thomas win.  I'll use the excuse that they have youth on their side, even if it's a poor one.  Today they beat us twice.  Rob barbecued sausages and I cooked onion soup potatoes and broccoli with cheddar cheese.  We ate out on our new patio (Jacqueline snuck a couple of pieces of sausage through the fence for the dog next door). 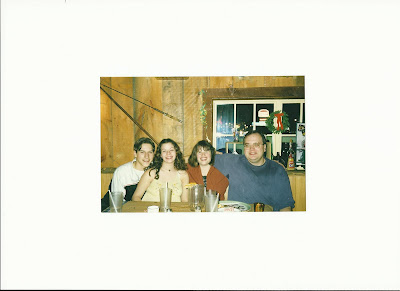