Scotland has the Loch Ness Monster.  Japan has Kawako.  And Canada has Ogopogo.  Possibly named after the Pogo Stick craze of the 1920’s, Ogopogo is a sea creature lurking off the shores of British Columbia’s Okanagan Lake.  My husband and I encountered Ogopogo in the summer of 1992, the year we married.  On an overcast Southern Ontario day, I, with confetti in my hair, and Rob, with a new ring on his left hand, hugged our parents goodbye and headed out west on our honeymoon.  It was like a scene from the movie “Planes, Trains and Automobiles”:  we flew to Calgary (our stewardess saw the confetti in my hair and invited us to talk to the captain in the cockpit); we boarded a train to Vancouver; and then we rented a car to take us into British Columbia’s Interior.  Driving along the highways to the Okanagan Valley, we enjoyed a scene of endless blue skies, lush evergreens and white-capped mountains.  Little did we know we were about to meet a monster.
After six hours in the car, we arrived in Kelowna and were treated to the breathtaking view of Big White Mountain just outside the city.  Rob slowly guided our rental car up the side of Big White, manoeuvring the tight curves carefully.  At one point we saw a sign that read: "Put belts on tires here." We didn't have to worry about traction, though, since it was the middle of summer.  About three quarters of the way up the mountain we spotted a black and white cow.  Don’t cows belong on farms?  Finally we reached the top of Big White Mountain, parked the car and stretched our numb legs.  Balancing our luggage, we found my Aunt Sandra's condo and unlocked the door:  inside, it was clean, neat and nicely decorated.  This would be our home for the next week, a wedding gift from my aunt and uncle. As the sun set, we could not hear a sound, save the occasional howl of one lonely dog.  We urbanites were all alone on Big White Mountain.

The next day, as Ogopogo swam up the coastline of Okanagan Lake from his Rattlesnake Island home, we headed down the mountain, past the howling dog, past the wild cow and past the "Put belts on tires here" sign to the city of Kelowna.  Our destination was Okanagan Lake.  The weather was gorgeous for a beach day: an azure sky without a cloud, a gentle breeze, and a dry heat.  Opening our picnic basket, a recent wedding gift, Rob and I unpacked it and sat on a blanket eating egg salad sandwiches and drinking Nestea.  After lunch, clad in our swimsuits we waded into the crystal blue waters of Okanagan Lake, a 135 km-long and 5-km wide and 232-metre deep lake nestled between the Rocky Mountains.  It was our first swim as husband and wife.  We were running on the high newlyweds get when they first fall in love and feel like they are the only two people in the world.


But we were wrong – someone else was in the lake with us.  Rob felt something brush past his hand, then saw a long shadow disappear into the depths of the lake.  As my 6-foot-4-inch husband raised his hand up to point out the direction in which the shadow had headed, I noticed he was no longer wearing his wedding ring.  I had heard of newlyweds losing their wedding rings (my Dad lost his in the first six months) but this was ridiculous!  “You’re kidding, right?”  I said to my husband.  “No, it’s gone!” he shouted with a shocked look on his face.  That shadow must have been Ogopogo and he must have eaten Rob’s ring.  I would have made a peace offering to the snake-in-the-lake like the 19th-Century Native Indians did as they paddled in their canoes, but I didn’t have a dead animal in my picnic basket, only a stale egg salad sandwich.  Somewhere inside that creature was a golden ring engraved with the words “To My Rob, Love Linda – July 11, 1992”.  So much for a peaceful day at the beach!

Yes, we lost the ring, but at least we didn’t lose each other.  I wasn’t about to let Nessie’s Canadian cousin ruin our honeymoon!  Back on that newlywed high, we hopped into our rental car and returned to Big White Mountain. The ski lift hung empty and there was no sign of life.  As we unlocked the condo, I heard the three words every bride longs to hear from her groom:  “I am starving!”  So I warmed some food up in the microwave that we had bought at Safeway in town, given that I was a newlywed and did not yet know how to cook.  After supper, we had nothing to do. The silence was deafening.  So we did what newlyweds usually do – we played Scrabble.

The following day, we took a trip south to Penticton, near Ogopogo’s home.  The Okanagan's dry heat and fertile soil lend themselves well to growing produce.  If Kelowna was pretty, Penticton was beautiful!  We strolled arm in arm in the fruit orchards, basking in the sun’s warmth.  We picked cherries, Rob doing more eating than picking.  It reminded us of the Niagara Region of Ontario, just with mountains rather than an escarpment.  Aah!  Life was good.

After five days on Big White Mountain, however, our honeymoon high started to wear off.  I found myself crying due to the isolation we experienced there.  A bride crying on her honeymoon; that just wasn’t right!  What happened to our wedded bliss?  Even though Rob wanted to stay longer to save money on a hotel (we had our first marital fight) we left the condo two days early and wound our way past the howling dog (now silent), the wild cow and the sign saying "Put belts on tires here".  We took one last drive through Kelowna and said goodbye to the sun-kissed valley, the crystal blue lake and a sea creature named Ogopogo.

The next day, Rob and I went shopping for a new wedding ring.  Even though it’s not engraved like the first one, it has served its purpose for 19 years.  We also made another purchase at the mall:  two snake-like stuffed animals covered in green fur with big eyes and shark-like teeth.  They would make good presents for our little nieces.  While I was disappointed that Rob lost his ring, I guess Ogopogo needed it more.  Thanks to the elusive sea serpent we now have a lasting memory of our Okanagan honeymoon. 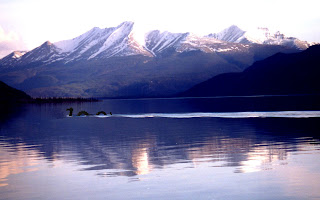