Growing up in Toronto during the Second World War, my Dad remembers reading in the Toronto Star that German U-boats were spotted in the St. Lawrence River, that German soldiers were spotted entering a Montreal movie theatre.  He remembered air raid wardens marching up and down his street during blackouts in Toronto.  I had always thought that the World War Two theatre was restricted to Europe, not North America (with the exception of Pearl Harbor).  I couldn't believe that the Germans had come that close to home.

HMCS Charlottetown was one of the first targets of the German U-boats courtesy http://www.veterans.gc.ca/eng/remembrance/history/second-world-war/battle-gulf-st-lawrence/intro.


As part of the book that I'm writing about wartime Toronto and the Maple Leafs, I researched German U-boats in Canada and found out that a full battle took place here, the Battle of the St. Lawrence, from 1942 to 1944.  Submarines penetrated the Cabot Strait and the Strait of Belle Isle (my mother in law was born and raised on Belle Isle) to sail down the St. Lawrence.  There, they torpedoed and sunk an amazing 23 Allied ships, some within 300 kilometres of Quebec City. 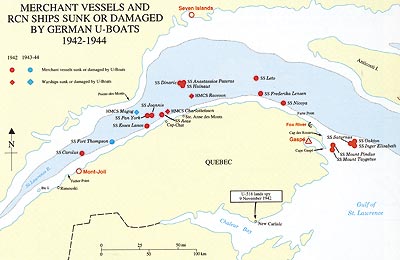 
German U-boats posed not only a military threat but also an economic one:  they decreased cargo shipments by 25%.  Quebec City, Trois Rivieres and Montreal were essentail ports, the latter accounting for "more tons of shipping than all over East Coast ports combined" (http://www.veterans.gc.ca/eng/remembrance/history/second-world-war/battle-gulf-st-lawrence/intro).

Canadian stamp issued on the 50th Anniversary of the Battle of the St. Lawrence courtesy https://www.pinterest.com/agent713/war-stamps/.