Stompin' Tom Connors did not have an easy life.  Abandonned by his father, he was raised by a destitute mother.  At a young age, he was taken away by Children's Aid and became part of the foster system.  Still a teenager, he hitchhiked his way across Canada and wrote songs about it as he went.  It was at the Maple Leaf Hotel in Timmins that he got his big break, playing his guitar and belting out his country tunes.  It was also at the Timmins hotel that he got his nickname:  he would stomp with his cowboy boots so violently that a big chunk of the stage flew across the room into a customer's drink.

Stompin' Tom had a way with words:  he knew how to tell a story.  A proud Canadian, his music was filled with tales about Canada.  In the 1970's, with more Canadians heading south of the border to promote their music, Stompin' Tom put his cowboy boot down, refusing to be a part of the mass exodus.  He believed that Canadian talent should stay in Canada and be promoted here.  He took some flack for his outspokenness, but he was only telling the truth.

In 2009, Canada Post honoured him with a stamp.  He passed away four years later, always a Canadian patriot.


For more information read One Nickel Short in the Nickel Belt at http://alinefromlinda.blogspot.ca/2011/10/one-nickel-short-in-nickel-belt.html. 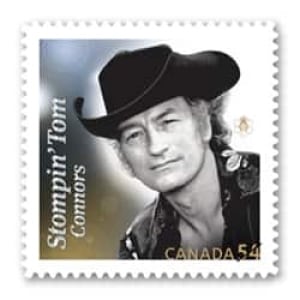