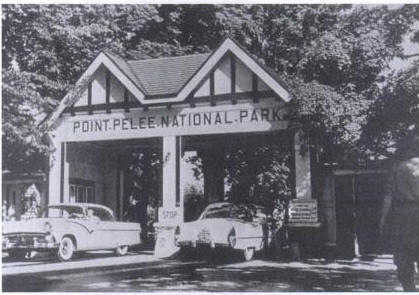 
Birds, butterflies, flora and fauna are all part of Point Pelee's National Park, the southernmost point of continental Canada.  However, in the 1950's and 1960's, the Point looked quite different.  By 1968, three hundred cottages peppered the peninsula.  A record 785,000 visitors congregated in the park.  Automobiles were parked bumper to bumper at East Point Beach.  The human invasion was felt by the local wildlife; ten different species of amphibians and reptiles disappeared. 
Park officials knew that drastic measures were required to restore Point Pelee to its original glory.  In the 1970's, the government starting buying up private land.  Apple orchards, fisheries and cottages were purchased, giving the park an additional 125 hectares.

The DeLaurier Homestead is one of the few buildings that has been preserved courtesy pc.gc.ca.

In the 1980's, a major road was removed.  Park housing and beach facilities at the tip and East Point Beach were also taken out, restoring the natural shoreline.

In the 1990's, the main road to the Point was removed.  The administration and maintenance buildings were relocated outside the park.  Tulips and daffodils planted by cottagers were also taken out.  By 1993, flying squirrels were reintroduced to the area. 
In 2000, only one cottage was left at Point Pelee.  The number of yearly visitors had been reduced to 350,000. People still visit the tip, but on foot or by shuttle rather than by car.  Fifty percent of the dry habitat had been restored.  Four hundred buildings had been removed, including six fisheries.  Twenty kilometres of roads had been dug up.


Today, reptiles and amphibians abound in Point Pelee.  The peninsula is the home of Canada's only lizard, the five lined skink.  Hickory, hackberry and sassafras trees flourish in its Carolinian forest.  The point is a breeding ground for 100 species of birds.  Hundreds of birds use the park as a major migration route. Monarch butterflies use the Point as a staging ground.  The white tailed deer's population has outgrown the capacity of the park.  Point Pelee is back.