The Underground Railroad: Next Stop, Toronto! 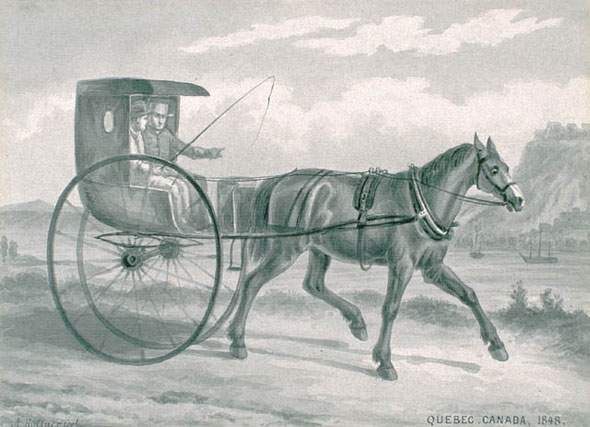 Taxi cab similar to that of Thornton Blackburn courtesy www.blogto.com.

Long before the orange and green taxi cabs raced down the streets of Toronto, a red and yellow box cab, pulled by a horse, rolled along the city's dusty roads. Toronto's first cab company, its operator was Thornton Blackburn, an escaped slave from Kentucky.

In the 1830's, Thornton and Lucie Blackburn worked as slaves in Louisville, Kentucky.  The couple managed to escape via the Underground Railroad and settled in Detroit.  However, slave catchers pursued the Blackburn's and tracked them down.  In 1833, they were recaptured and jailed.  Lucie arranged to trade clothes and identities with Mrs. George French, managing to escape across the Detroit River to freedom in Amherstburg, Upper Canada.

However, Lucie's husband remained in the Detroit prison, shackled and bound.  ON the night before he was to be deported back to Kentucky, a group of 400 blacks protested and stormed the jail, setting Thornton free.  A two-day race riot ensued, the first of its kind in Detroit, during which the sheriff was shot and killed. A posse pursued Thornton's horse and cart, but when they reached it, it was empty.

Thornton had escaped through the woods outside of Detroit to a boat at the mouth of the Rouge River.  The boat transported him across the Detroit River to freedom in Essex County, Upper Canada, one of an estimated 30,000 black slaves to do so.  There, Thornton was jailed briefly but released when the Lieutenant Governor refused to extradite him back to the United States. Thornton, reunited with Lucie in 1834, settled in Toronto.  He sent away to Montreal for the blueprint for a taxi cab.  He built the red and yellow vehicle to be pulled by a horse.  Soon, his taxi business was thriving. He also established the Little Trinity Church, Toronto's oldest church.

He became a staunch abolitionist and helped others settled in the community of Toronto as well as Buxton. Later in the 1830's, he made a daring return to Kentucky to help his mother escape and join him in his adopted country.  In 1851, Thornton along with many other blacks, attended the North American Convention for Colored Freemen held at St Lawrence Hall in Toronto.

St. Lawrence Hall, the site of many abolitionist speeches, including one by Frederick Douglass, courtesy www.torontohistory.org.

Thorton Blackburn died in 1890, leaving a substantial estate of $18,000.  His wife, Lucie, passed away five years later.  In 2002, a plaque honouring the Thornton's was erected at the site of their excavated house, on the corner of Eastern Ave. and Sackville Street in Toronto.